Spectacled Flowerpecker NOT YET EVALUATED 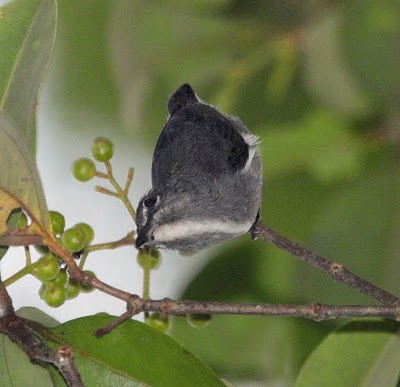 The Spectacled Flowerpecker is a new species of bird discovered in the forests of north-eastern Borneo in June 2009 and apparently belonging to the flowerpecker family Dicaeidae. It has not yet been formally described or given a scientific name because of limited information and lack of a specimen.
The new flowerpecker was first observed and photographed on 18 June 2009 by Richard Webster, a tropical ecologist, at the Borneo Rainforest Lodge within the Danum Valley Conservation Area, Sabah, Malaysia. Further sightings and photographs of more than one individual were made over the next two days by Webster, David Edwards from the University of Leeds, and Rose Ann Rowlett. The lodge is sited within unlogged tropical rainforest, 180 m asl at 5Â°01â€™43â€N 117Â°45â€™5â€E. The sightings were made from an observation platform on a suspended walkway within the rainforest canopy. The height of the birds sighted was over 40 m above ground level.
The first bird sighted had prominent white arcs above and below the eyes, creating a broken eye-ring effect. The white throat was bordered by a diffuse dusky malar, merging into grey sides separated by a white stripe from the throat to the centre of the underparts. The upperparts were slate-grey. There were prominent, pure white pectoral tufts emerging from the carpal joints. The eyes, bill and legs were dark. A different bird seen on 20 June was less well marked, with paler grey plumage, less prominent eye-rings and pectoral tufts, and a less defined stripe down the breast, which, as well as the vent, was marked with a hint of yellow. Edwards et al. (2009) suggest that two adult individuals were seen, with the more strikingly marked bird the male and the less well-marked bird the female.[3] The prominent broken white eye-rings suggested the use of the term “spectacled” for the common name.
When observed the birds were feeding in a fruiting epiphytic mistletoe that was parasitising a large Koompassia excelsa tree. Other species of flowerpecker seen visiting the same mistletoe included the Yellow-breasted, Yellow-rumped, Yellow-vented and Orange-bellied Flowerpeckers.
Edwards et al. (2009) speculate that the Spectacled Flowerpecker is a rainforest canopy specialist, relying on ephemeral epiphytic fruits such as mistletoes, being highly mobile and rarely, if ever, visiting the understorey of the forest – explaining why the new species remained undetected for so long (wiki).