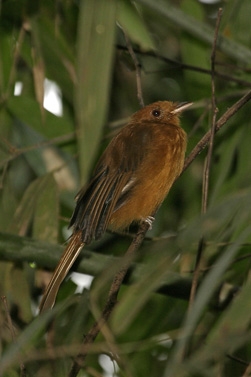 A tyrannid assignable to genus Cnipodectes by a combination of relatively large size; broad, flat bill surrounded by well-developed rictal bristles; shaggy plumage texture overall; broad, squared tertials with pale inner and outer edges; and primaries twisted in their orientation, with primaries 8-6 having a modified shaft structure on the underside and a raised ridge along the inner web. It can be distinguished from all forms of C. subbrunneus by its richly saturated rufous plumage, larger size, and proportionately narrower bill. A distinctive new species of twistwing (Tyrannidae: Cnipodectes) from southeastern Peru has been discovered. Despite extensive ornithological research in the region, this species has escaped notice, which suggests that it may be restricted to larger blocks of forest dominated by bamboo, a habitat poorly surveyed in Amazonia.
This large tyrannid is a Guadua bamboo specialist that has been found at a number of sites in SE Peru and adjacent Bolivia. The first specimen was collected in 1990, but it was misidentified as Rufous Casiornis. Currently known from only a few sites in the departments of Madre de Dios and Cuzco, the species life history is very poorly known. To date, the only other species of Cnipodectes, C. subbrunneus (Brownish Twistwing), is not known from most of southeastern Peru. In all the authors’ encounters with C. superrufus, the individuals perched 1-3 m off the ground and sallied for arthropods, changing perches with each foraging maneuver. Estimated foraging maneuver is about every 30 s as the bird progressed along a 30-m-wide bamboo corridor between two pastures. Also noticed is that the species performs a lethargic wing-raising behavior, similar to that reported for C. subbrunneus.
download discovery article
← Previous Post
Next Post →