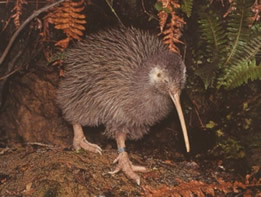 Okarito brown kiwi, or rowi, are New Zealand’s rarest kiwi, with an estimated 250 surviving in just 10,000 hectares in South Okarito Forest, in South Westland. It was only in 1994 that they were found to be an entirely new species and given the name rowi. Rowi vary from other types of kiwi in a range of ways. The most obvious difference is that rowi are quite greyish in colour and often have patches of white feathers on their faces. They also feel soft to touch, whereas North Island Brown Kiwi feels quite coarse. Both the male and female rowi take it in turns to look after the eggs, while in most other kiwi varieties only the male does this. Rowi have a much higher adult survival rate than North Island kiwi. Some rowi may live up to 100 years while North Island species may live up to 32 years. Conservation efforts such as Operation Nest Egg and the stoat control regime have been partially successful in restoring the Rowi population. However, the rowi is still in a fragile stage of existence. Predation, mainly from imported animals such as stoats, is still the biggest threat to the Rowi. The female will lay up to three eggs, each in a different nest. Both male and female incubate the eggs. Investigating the status of the Okarito population began in the early 1990’s by surveying Okarito Forest and monitoring breeding burrows. It soon became apparent that the population was in decline and the likely cause of the decline was stoat predation. Stoats were bought to New Zealand to help in the control of rabbits but unfortunately they found that our native birds were an easier target. Although adult kiwi are strong enough to defend themselves, kiwi chicks are extremely vulnerable until they attain approximately 1 kilogram in weight. To date no rowi are known to have been predated by stoats once over this weight. Possums are another threat to rowi. They have been videotaped entering kiwi burrows and may damage eggs and possibly disrupt kiwi breeding attempts. Possum numbers have been reduced to low levels since a major control operation in 1998 and their density is monitored bi-annually.
← Previous Post
Next Post →