Source to all birds on the Planet
admin
Psittacidae, Psittaciformes
Comments 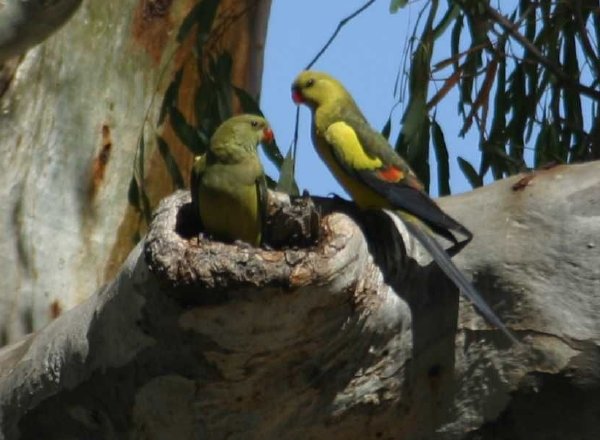 The eastern subspecies of the Regent Parrot is a slim, medium-sized (length: 37 to 42 cm; weight: 160 to 190 g) yellow or green parrot with contrasting blue-black wings and tail. The males and females appear different. The male has a bright yellow head and neck, which grades through yellow-olive on the hindneck to dark olive-green on the mantle and scapulars; the scapulars are also mottled blackish; the back and rump are bright yellow; and the uppertail is blue-black. The upperwings are mostly blue-black, with a prominent yellow shoulder-patch and red feathers on the inner secondary coverts and tertials; in flight, the red secondary coverts appear as a red band. The underbody is bright yellow except for the undertail, which is black. The underwings are bright yellow, contrasting with blackish flight feathers. The female has a similar pattern of plumage to the male, but appears duller: the head, neck and underparts are dull olive-green instead of bright yellow; the tail and flight feathers are dull bluish-green instead of blue-black; the shoulder-patch is duller greenish yellow; and the red markings on the wings are duller; and the underwings appear lime green instead of bright yellow.

Listen to the sound of Regent Parrot

The Regent Parrot lays its eggs in hollow branches or holes in large old or dead trees near water. River Red Gums are favoured in the east and in the west, Salmon Gum woodland or often remnant roadside patches are used. The female incubates the eggs and the male feeds her by regurgitation. The milky seed of maturing wheat may be used to feed the young birds. Breeding season from August to January. Clutch Size: 3 to 5.Incubation: 22 days.Nestling Period: 30 days. ?Breeding is colonial with up to 27 nests within the colony. Nests are usually within 150 metres of each other and up to five nests have been recorded in a single tree.

The Regent Parrot eats seeds of grasses and plants and cereal crops, especially wheat. It also eats buds and flowers, insect larvae, psyllids and lerps. It forages in pairs or small parties, usually on the ground, but also in the canopy of trees or in spilled grain on the ground.

This species has a very large range, and hence does not approach the thresholds for Vulnerable under the range size criterion (Extent of Occurrence <20,000 km2 combined with a declining or fluctuating range size, habitat extent/quality, or population size and a small number of locations or severe fragmentation). Despite the fact that the population trend appears to be decreasing, the decline is not believed to be sufficiently rapid to approach the thresholds for Vulnerable under the population trend criterion (>30% decline over ten years or three generations). The population size has not been quantified, but it is not believed to approach the thresholds for Vulnerable under the population size criterion (<10,000 mature individuals with a continuing decline estimated to be >10% in ten years or three generations, or with a specified population structure). For these reasons the species is evaluated as Least Concern.
The Regent Parrot is usually seen in pairs or small flocks, but much larger flocks may congregate around abundant sources of food. During breeding season, when females are busy incubating the eggs, males may form single-sex flocks. The Regent Parrot is endemic (only found in) to Australia. There are two separate populations: in the east they are found in south-western New South Wales, north-western Victoria and the Murray Mallee region of South Australia, while in Western Australia, they are found in the south west, where they are more numerous.

Resident with some altitudinal displacements, probably in search of food or water.