Source to all birds on the Planet
admin
Ciconiiformes, Threskiornithidae
Comments

The White-shouldered Ibis population is very rapidly diminishing. The reasons are not fully understood but certainly habitat loss, hunting and disturbance are on-going threats. If effective protection measures could be in place in north-eastern Cambodia and along the Mekong channel, the species largest population may be saved. It is now estimated at a 650 mature individuals, equivalent to about a World population of about a 1000 individuals. It is a non-migratory species with some seasonal movements; it is gregarious with groups observed as large as 180 individuals.

It was first described by Hume in Stray Feathers, 1875:

“Geronticus Davisoni, Sp. Nov.
It seems incredible that so large, handsome, and strongly characterised a species should be still undescribed, but I can find no mention of it in Mr. Gray’s hand list, or in the lt Museum Des Pays Bas,” and I am therefore constrained to describe it under the name of its discoverer, Mr. William Davison, who shot a couple last January on the banks of the Pakchan Estuary in the extreme south of the Tenasserim Provinces.

The legs and feet are coral red ; the irides bright orange ; the bill is very dark plumbeous, blue at base, shading to a dull ochraceous clay color towards the tip ; the head is black, the anterior portion only, covered with small brown warts, becoming obsolete on the crown and occiput ; a broad white band of naked skin encircles the neck ; it stretches across the throat, runs up the lower margin of the ear and across the nape, being prolonged upwards into an arrow-head point where it is strongly tinged with blue.
A brown of somewhat varying shades tinged especially on the scapulars, tertials, rump, and upper and lower tail-coverts, with a metallic greenish lustre ; the wings and tail are likewise precisely as in that species with the same blue and greenish blue metallic lustre, and with the same snowy white patch, though somewhat less in extent, above the elbow joint. The pure white naked ring round the head or rather round the neck just where this joins the head makes this bird very conspicuous in life. 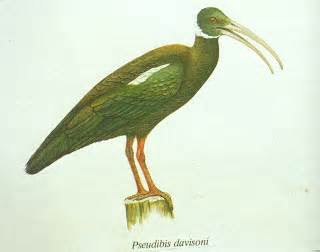 Mr. Davison says that they were not rare but were excessively wary. Their habits appear to be similar to those of their Dearly-allied congener so common in India and Ceylon. A specimen of this latter species, procured in Borneo, is, I note, in the Leyden Museum, but with this exception, I can find no record of its occurrence anywhere in
Malasia or the Archipelago, or indeed anywhere except in India and Ceylon. Search permanent wetlands in the Mekong lowlands during the dry season; open dry forest, grasslands and abandoned rice fields in the wet season or remote forested rivers in Kalimantan.”
In bird-lore, the Ibis is the last animal that hides itself before a hurricane, and the first to reappear after the passing of the storm.

Birdlife in 2014:
“Pseudibis davisoni now occurs in northern and eastern Cambodia (c. 90% of the world population), southern Laos and along the river Kalimantan, Indonesia. It is extinct in Thailand and there are no recent records from Myanmar.”

It visits wetlands and grassland, pools, marshes, also wide rivers with sand and gravel bars. These habitats are heavily in decline, in Indochina there seems to be an adaptation to open forest. During the dry (breeding) season, it favors abandoned rice fields, very wet grasslands and forest. It has been observed feeding on the forest floor as well as at small waterbodies and shallow river channels. It feeds mostly on amphibians in the dry season, also invertebrate usually along seasonal pools. During the wet season (when water is deep) it probably feeds on worms, beetle larvae and the occasional reptile. It may be bound to large ungulates (mainly big vegetarian mammals with hoofs) who help shape the dry lands having pools (trampled areas).
However, large wild ungulates have now all disappeared from the species region, and it may now be more closely associated with domestic livestock. This association renders it more vulnerable for human activity. Anither side effect of the binding with livestock is it appears very often outside the protected areas.
Habitat loss, hunting of adult birds, eggs and chicks collecting for food, and disturbance, have led to the loss of protected feeding, roosting and nesting areas. However, hunting may now be less of a threat in Cambodia following education of locals and the confiscation of weapons. Poisoned baits set for hunting continue be a threat, likewise fishing through poisoning and electro-fishing.
Probably the most significant threats are the granting of land concessions for logging or plantations and infrastructure development such as dam construction, which threaten even protected areas. 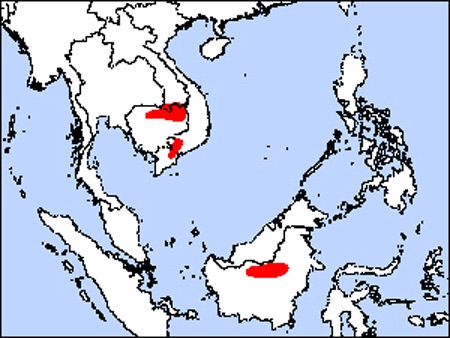 Conduct further surveys in Borneo, central, northern and eastern Cambodia and the Satay area of Vietnam to quantify remaining populations, only in areas where conservation intervention is considered reasonable and there are grounds for considering a significant population might be found. Focusing on areas close to settlement with traditional rice cultivation may be more productive than for core areas of remote forest. Establish further protected areas or integrated conservation development projects covering landscape-level habitat tracts supporting populations, particularly in northern Cambodia, the Mekong channel and along the Mahakam river, East Kalimantan. Enforce strict protection at important sites. Promote widespread conservation awareness programmes aimed at reducing wetland disturbance and large waterbird exploitation in Indochina.

Birdlife has implemented a number of effective protection actions:
A proposal to establish a Protected Forest in Western Siem Pang has been prepared, reviewed, revised and approved by the Provincial Governor and the steering committee of Ministry Agriculture Forestry and Fisheries.
The government have been lobbied to complete the notification process, including through producing a poster about the international importance of Western Siem Pang for conservation.
Research and monitoring continues to be carried out, focusing on the foraging ecology of the species, nesting and flock size at roost sites and examining the value of trapaengs to the assemblies of waterbirds at the site.
A Local Conservation Group at Western Siem Pang has been supported since August 2007, and conducts monthly patrols to the most important trapaengs to record key species and any illegal activities.

We, at Planetofbirds, think this wonderful species will survive, be it only a small population. It is firmly bound to human activity, which is a major threat and also a sour blessing, it is easier to find.
In terms of biodiversity there is another point of attention. The Colpocephalum davisoni is a bird louse, specifically bound to the White-shouldered Ibis. If the Ibis becomes extinct, this louse will become extinct. Let us just be double careful. 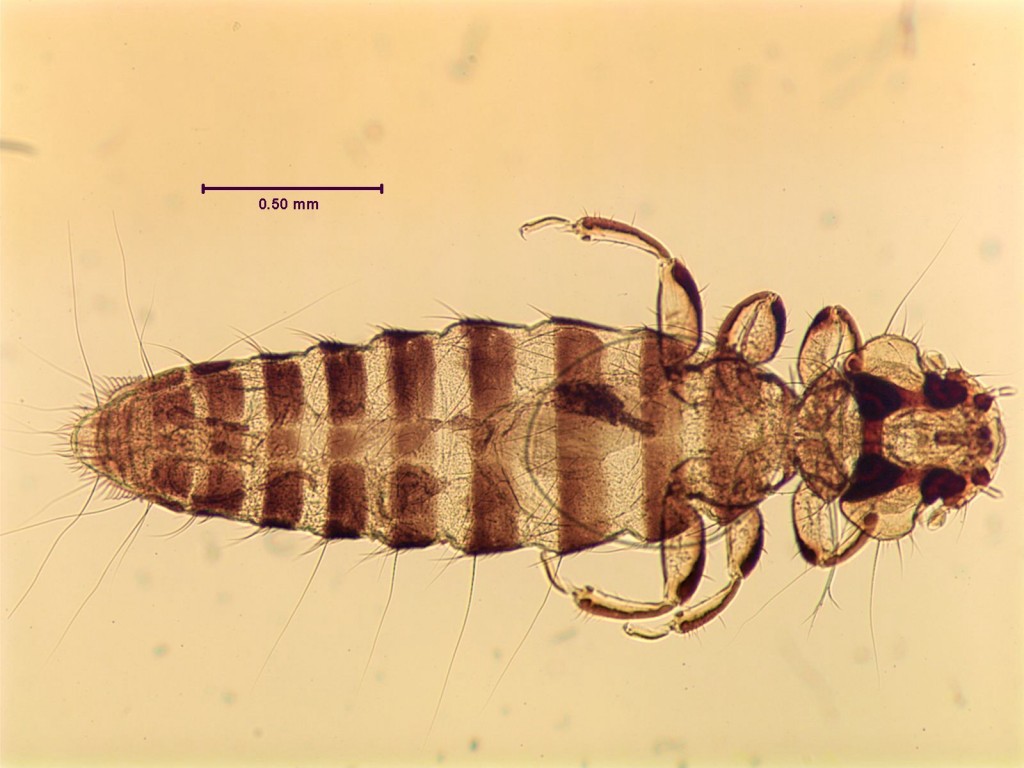