This species has an extremely small population that is undergoing a continuing and very rapid decline as a result of habitat clearance, and as a consequence it is listed as Critically Endangered.
The Flores Hawk-eagle, Nisaetus floris (formerly Spizaetus floris), is a fairly large, up to 75-79 cm long, raptor in the family Accipitridae. Adults have dark brown upperparts, a brown tail with six bars, a white patch in the wings that is visible in flight, white underparts, and a white head with fine brownish streaks on the crown. It used to be treated as a subspecies of the Changeable Hawk-eagle; at least in part because of confusion over the true adult plumage of the Flores Hawk-eagle, which resembles the juvenile of the Changeable Hawk-eagle. Unlike that species, adult and juvenile Flores Hawk-eagles are quite similar. 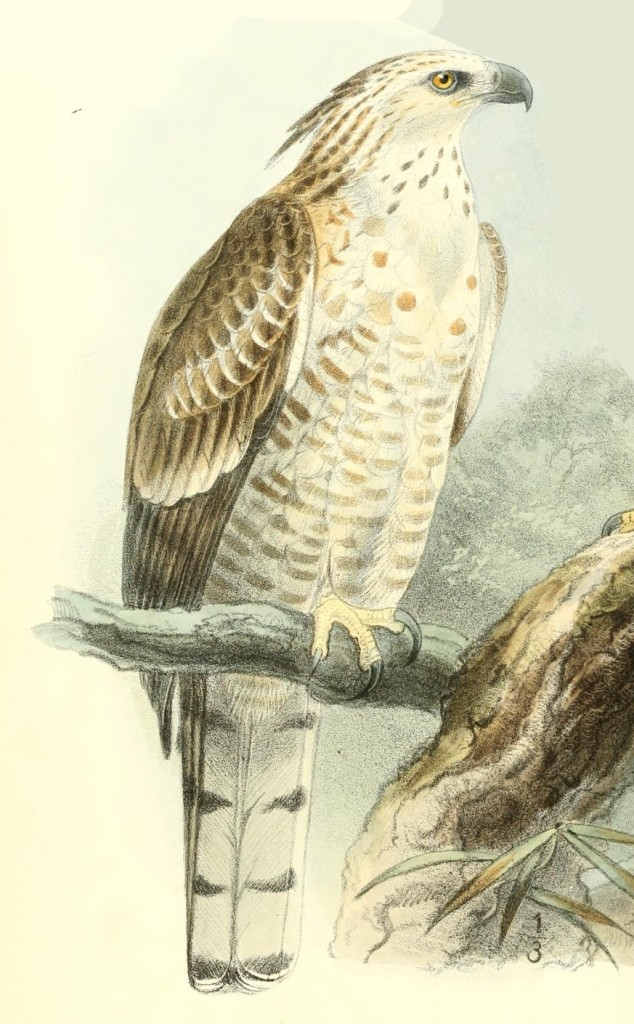 Adult Flores Hawk Eagles have a number of traits (e.g. white head and underparts) that are typical of juveniles in other hawk eagle species. This could be considered a case of neoteny. A term describing the trait in which the adult and juvenile plumage are largely the same. Neotenous morphology and behaviour is likely to reduce aggression from adults towards juveniles and facilitate sociality.
In all birds of prey the skeletal growth is completed before the final coloring of plumage in the late nestling stage. In other words, overall size is completed before plumage finishes developing. Therefore, determining the species distinct from Changeable Hawk-eagle juveniles is foremost a measure of size.

It was hardly known that juvenile and adult plumages of this species are very similar, both being white-headed, unlike Changeable Hawk Eagle in which the white-headed juveniles develop brown plumage on their heads during adulthood. Many illustrations in handbooks and field guides were inaccurate.
All the confusion started with Hartert in 1898: “This bird must be my S. I. floris., or a still larger subspecies. It is in an immature dress, presumably in its second or third year. The upper surface is deep brown and white, the feathers being dark brown, paler towards the base, those of the hind-neck and back white with large deep brown tips. Tail brown with blackish-brown bars, primaries blackish brown, the inner webs irregularly barred and mottled with white and brown towards the bases. Underside white with blackish-brown shaft-stripes, the feathers of the thighs deep brown, spotted, some almost barred, with white. Under wing-coverts blackish with a few white spots, axillaries black-brown, bases and some spots”.

Nisaetus floris is found in Indonesia, on the islands of Flores, Sumbawa and Lombok, as well as on two satellite islands, Satonda and Rinca. The species has also occurred on Komodo, and has recently been discovered on Alor and is apparently present throughout the island. Its population size has been estimated at fewer than 100 pairs, based on the extent of suitable habitat, although it is estimated that at least 20 additional pairs inhabit Alor. It is assumed to be declining because of relentless habitat destruction and has almost certainly experienced a very rapid decline.

It is found in lowland and submontane forest up to 1,600 m, with the majority of observations being made in lowland rainforest. It has been sighted over cultivated areas, but always close to intact or semi-intact forest. Observations outside the core habitat suggest that the species may be able to disperse across the narrow straits between islands so mixing between island sub-populations is possible. Breeding takes place during the dry season, display flight and copulation have been observed on Flores in June-July. 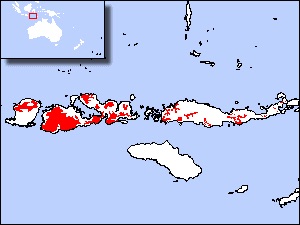 The most serious threat to Flores Hawk Eagle and their habitat is land use change, shifting cultivation, hunting practice by local community because the raptors is known as predator to their chickens. Also the taking of firewood and wood material for building in Flores Hawk Eagle habitats and forest clearance.

Conservation according to Birdlife: Work is underway to inform local people of the importance of this species. Ensure the survival of the species by securing further protected areas within its range. Reduce persecution and exploitation levels through local education programmes. Conduct further research on the species’s population size, trends and range. Verify records from additional islands. Study movements and determine population structure.

We, at Planetofbirds, have a conservation suggestion. Our website contains many stories about folklore and ethno-ornithology. In one of the articles we read, writing this entry, we came across this interesting piece of information:

“Flores Hawk Eagle used to be regarded as a totem (â€˜empoâ€™) among the Manggarai people in western Flores, who considered it to be an ancestor of humans, and therefore did not hunt it. However, these traditions have now broken down. ”

The Manggari are a native tribe from Flores. Conservationists informing the locals about the importance of the species should take ethno-ornithological stories in serious consideration. We believe that in connecting to the locals using their traditional heritage may well be a successful strategy in further protect the species. Know not just the species but its main threat, thriving humans, as well.