Source to all birds on the Planet
admin
Gruiformes, Otididae
Comments

This is a 92-122 cm unmistakable, large, brown-and-white bustard with black crown and wing markings. Males have whitish neck and underparts with narrow black breast-band. Females are smaller, with greyer neck and typically no breast-band.

Stuart Baker in his game birds of India, 1921 writes the following account.

In ‘ Stray Feathers,’ 1881, Mr. F. Wilson records the fact that a few Great Bustard are always to be found in Mazuffernugger during the cold weather, he, himself, having on one occasion seen a flock of sixteen. Mr. F. W. Butler in the same volume confirms this, and says that a few are to be found in the district throughout the year. I have several letters informing me that this fine Bustard is common in parts of Eastern Sind, and by no means rare in one or two favoured localities in Western Sind. In respect to Kathiawar Colonel L. L, Fenton writes : ” It is found throughout the Province of Kathiawar in suitable localities, which means everywhere except the Gir Forest and the Barda Hills. In what used to be called Bhattiana, now the Sind district, it is extremely abundant during the rainy season, when it breeds.

Less than a century ago, this species was common and in some areas even “extremely abundant”. Anno 2014 the Great Indian Bustard population is reduced to less than 200 individuals, a fact that is actually hard to believe. Birdlife states it now requires an urgent acceleration in targeted conservation actions in order to prevent it from becoming functionally extinct within a few decades. 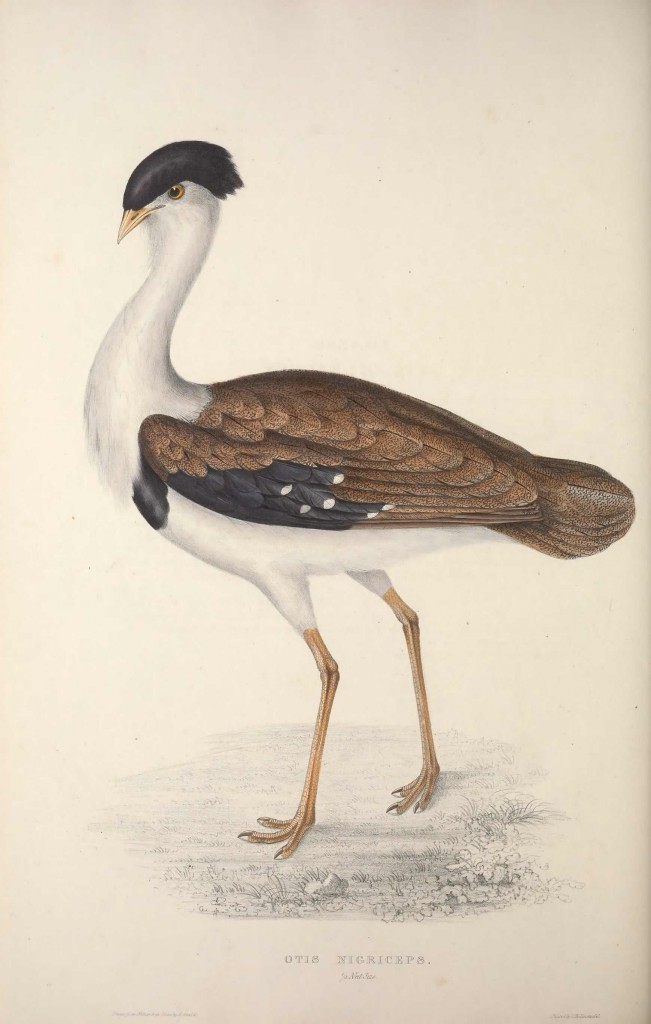 Current levels of hunting may result in the extinction of even the largest western Indian population in the next 15-20 year.
Historically, widespread hunting for sport and food precipitated its decline, accelerated by vehicular access to remote areas. However, the current threats are mostly from habitat loss and degradation, caused by; 1) widespread agricultural expansion and mechanization of farming; 2) infrastructural development such as irrigation, roads, electric poles, wind turbines and constructions; 3) mining and industrialization; and 4) well intended but ill-informed habitat management.

It is now legally protected in India and there are severe penalties for killing an individual. Programs have been started in Rajasthan developing infrastructure to reduce human pressure on habitats The Great Indian Bustard Foundation is conducting a school and large-scale community awareness programme.

In summary this species will, according to even the most optimistic prediction models be extinct in, say 2050. Its fast range, crossing several borders, is too large to be managed. It looks like in most important areas hunting is more or less contained, but converting poor low grass habitat to rich agricultural land is a major force towards extinction. Probably conservationists and the local government will agree on designating some important areas protected and actually protect it. Hopefully more than just a park or a zoo, this magnificient species, to us, is a beautiful symbol of natural freedom in unspoiled nature in many family groups. Feel free. Will it?