Source to all birds on the Planet
admin
Phalacrocoracidae, Suliformes
Comments

This species occupies a very area on the Chatham Islands, New Zealand. The past 10 years, surveys indicate that the species is in decline. In 2011 the population was estimated to be about 1000 individuals. The breeding colonies suffered much from agricultural activities and feral mammals. These colonial ground breeding species trample their eggs while in a panic.
This is a 63 cm large, black-and-white cormorant. Black head, hind neck, lower back, rump, uppertail-coverts, all with metallic blue sheen. With white underparts and pink feet. The white patches on the wings appear as a broad bar while folded. The forehead shows a large orange caruncle on each side of the head.

In the “Proceedings and Transactions of the New Zealand Institute” (1898) this was the description (mark the caruncles):
“Chatham Island Shag (Phalacrocorax onslowi). I have now before me two specimens of the Chatham Island Shag, which Dr. Forbes distinguished from P. imperialis under the above name. I find that, although the plumage is similar to that of the Stewart Island bird, it differs in having red caruncles on each side of the forehead. In P. carunculatus, from Queen Charlotte Sound, these caruncles are orange-coloured.” In Del Hoyo’s HBW 1 it is remarked how unclear the taxonomic status of this clad of NZ Cormorants is.

This species is restricted to the Chatham Islands, New Zealand. Four of the islands support breeding: Chatham, Star Keys, Rabbit and Pitt with a further population on North East Reef. 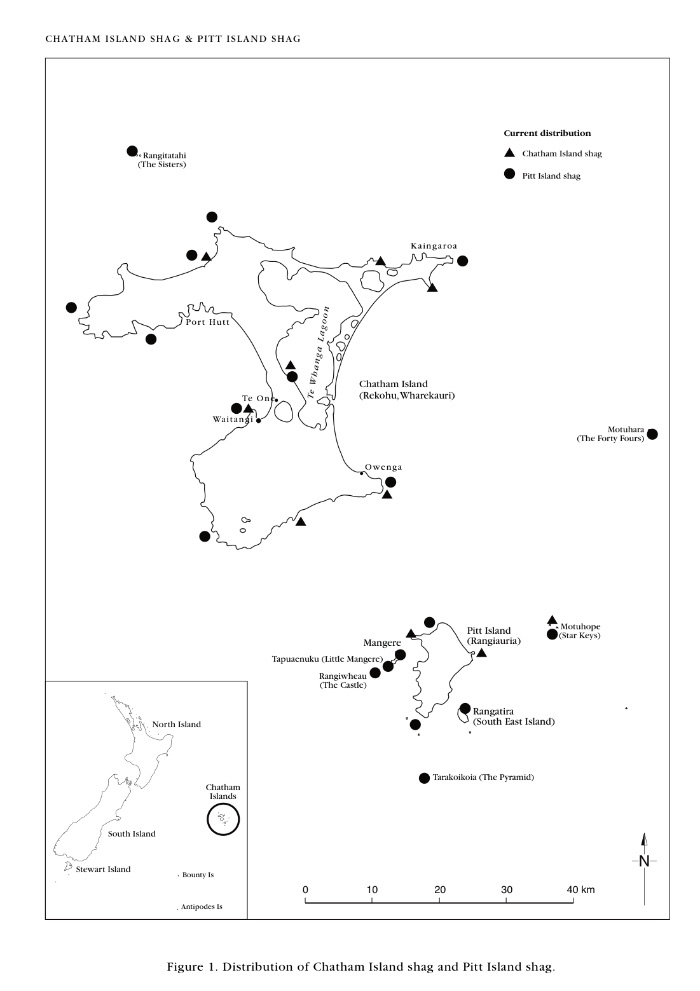 In 1997, a census found a total of 842 pairs at 10 sites. However, In 2003-2004 the breeding population was estimated to be 271 pairs, distributed at 13 colonies, with the largest colony on Star Keys holding 81 pairs. This represents a 67.8% decrease in total breeding pairs since 1997. Although colonies are spread over three islands, the species’s breeding range totals less than 1 ha. Its foraging range is probably about up to 24 km offshore, like the New Zealand King Shag P. carunculatus. The largest breeding colonies are found on islands free of introduced predators. It nests in colonies on islands and exposed rocky headlands. Nests are made of twigs, seaweed, and other vegetation on a platform. Up to four pale blue eggs are laid from August to December. These shags usually feed deep offshore but occasionally feed close inshore or in rock pools. Birds usually feed alone, but often roost in flocks of 100+ birds. It feeds mainly on small fish. 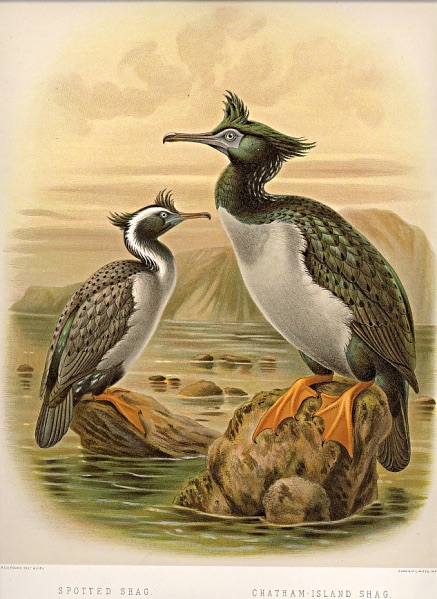 On Chatham, colonies are disturbed by humans, farm stock, feral cats, agriculture, feral pigs and other mammals. Several breeding colonies have been abandoned because of this. Fur seals may disturb the colony on Star Keys, possibly causing rapid declines, and have occupied former colony sites. Other facors are visits by tourists, illegal shooting and this species is vulnerable to climate change through sea-level rise and even severe storms.
In 2012 no conservation measures have been taken to protect this species. Possible measures are
monitoring a Chatham Island colony yearly to determine trends. Build fences to protect colonies from stock and pigs on main Chatham Island. Educate the local population about disturbance, and the impact of dogs on breeding grounds. Research the species to enhance understanding.

We, at PoB, are convinced this species will survive. About a 1000 individuals, a species action plan and a rich well-developed country. That should be enough.