Source to all birds on the Planet
admin
Trochilidae
Comments

The Blue-bearded Helmet-crest, is one of Nature’s most magnificient creatures. It is a large hummingbird with a long crest and a beard, making it somehow antropomorph.
Read the more poetic description written by Sir John Gould himself: “These bearded birds stand quite alone among the Trochilidae and although not remarkable for brilliancy of colour, their fantastic markings, towering crests, and lengthened beards render them very conspicuous objects”.
Unfortunately it has not been recorded since 1946 despite several recent surveys. It is (very) restricted to Subtropic Paramo habitat in the Andes region around Bogota. Extensive agricultural burning and overgrazing by local herding have severely degraded the high altitude paramo habitat. Any remaining population must be very tiny or even extinct.
In 2013 Collar writes: “The entire range of Oxypogon cyanolaemus fall within the Sierra Nevada de Santa Marta National Park, but given the intense pressure on the paramo there by indigenous peoples and also their direct use of the slow-growing fraijelon, this plant was officially registered in the Colombian Red List as Critically Endangered. Clearly for the same reasons, especially given the likely dependence of the helmetcrest on the fraijelon, we judge that Oxypogon cyanolaemus also meets the IUCN criteria for Critically Endangered.

A short historical survey in this species, rounds up the following quotes:

Clyde Todd in his 1922 “The birds of the Santa Marta region of Colombia: a study in altitudinal distribution” summarizes:

“It was discovered by Simons in the Sierra Nevada in July, 1879, at altitudes ranging from 11,000 to 14,000 feet, and up to the present time has been known to science only by the specimens secured by that collector. It was found very sparingly in April, 1914, on the Paramo de Mamarongo from 10,000 feet upwards. Bushes and shrubbery are scarce on this paramo, hence the few birds found there. On the Paramo de Chiruqua it was more common, and was taken as low down as 12,000 feet, and thence up to 16,000 feet, being most abundant between 13,000 and 15,000 feet. It is therefore essentially a species belonging to the Paramo Zone. Almost invariably it alights on the flower from which it is feeding, hanging on by its strong feet, instead of hovering before it like most hummingbirds. It is very shy”.

“This may be considered one of the finest of the Hurnmingbirds described and it forms an interesting addition to the genus Oxypogon. It was found by Mr. Simons on the 18th and 19th of July 1879, on the Sierra Nevada of Santa Marta, in Colombia, at an altitude of from 10,000 to 14,000 feet above the sea. Above dull green, the sides of the neck and the nape white, the whole of the head black, washed with green ; an elongated black crest, with a central streak of white, divided into two towards the nostrils; underneath whitish, the middle of the throat ornamented with elongated blue plumes the sides of the body spotted with dull green ; tall bronzy-green, the three outer tail-feathers on each side creamy white excepting the tips and the outer web (the outermost excepted). The female is similar to the male, but the head uniform with the back, the elongated crest and blue throat being absent; bill and feet black.”

Linden in 1842 reports while he was shooting in the valley below snow-line in the Sierra Nevada where birds of several species were fairly common, one of which was the strikingly handsome humming-bird Oxypogon cyanolaema, which feeds largely on the flowers of the Frailejon and which is peculiar to the Sierras of Santa Marta.

Paramo Vegetation: The Immense paramos or moor-like tracts of land extending from timber-line to the perpetual snow present many curious types of plants. Naturally the prevailing vegetation is grass, of many species, but numerous varieties of bushes and shrubs are present, as well as many kinds of annual flowering plants of considerable beauty and bright colors. The most peculiar and characteristic form of the paramo is a great plant known as “Frailejon” of which there seems to be but one species in the Sierra Nevada de Santa Marta, three very different varieties being found in the Sierra Nevada de Chita, In the eastern Andes. The leaves as well as the stalk are thick and woolly. In favorable spots it attains to a considerable size, but I never found it more than five to six feet high in the Santa Marta Mountains. In the eastern Andes it is often seen growing from fifteen to eighteen feet in height, with the trunks from eight to ten inches in diameter. The flower buds are enclosed in a mass of silky wool, of a pale greenish yellow, or golden yellow, very beautiful just as they begin to open, of large size and in clusters of four to eight. Humming-birds feed almost exclusively on these flowers in season, especially Oxypogon, while the seeds furnish the bulk of the food for the many sparrows of the paramo. 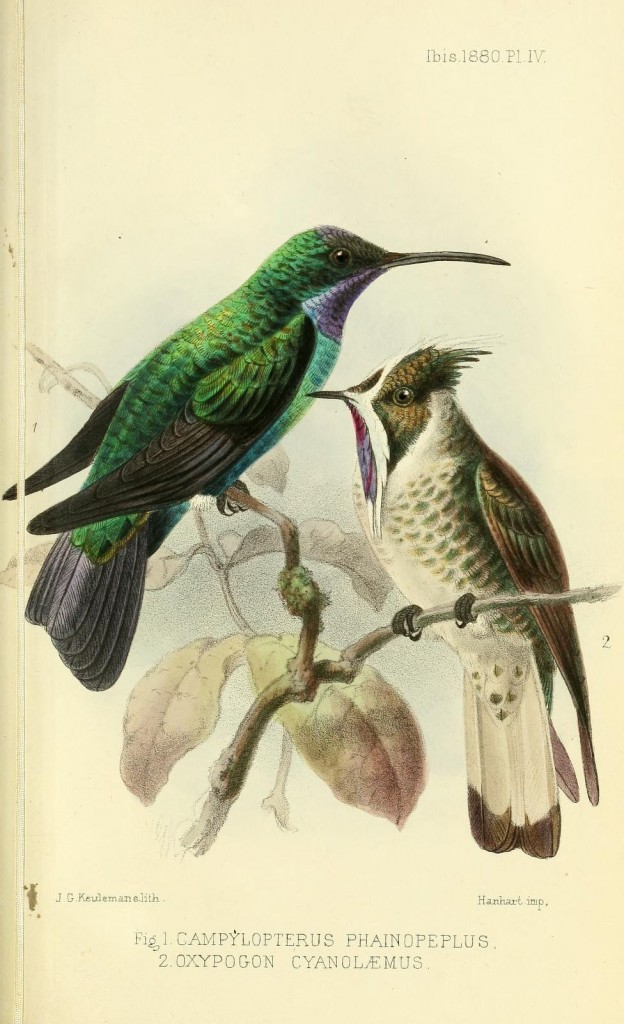 In current day (2013) this was written by Collar and Salaman:
Oxypogon cyanolaemus appears to be in serious danger. Of 62 cyanolaemus museum specimens the most recent were collected in 1946 by M. A. Carriker. There appear to be no records of it since that time. In February 2007 Niels Krabbe undertook a brief survey of the paramo on the southern slope of the Santa Marta Massif, but no Oxypogon was sound-recorded or seen reported.

Not much is known about this particular species breeding or even feeding habits. The one major consideration why this species possibly became extinct is its dependence on the fraijelon (Libanothamnus occultus), an Espeletia, flowering plant species. The Fraijelon is, like O. cyanolaemus, endemic to the Sierra Nevada de Santa Marta National Park, and both are currently classified as critically endangered. The paramos are a high altitude and very sensitive habitat. The delicate equilibrium of the ecological circumstances in which these paramos bound species live have been severly compromised by cattle grazing and the collecting of firewood. The habitat destruction is especially severe due to the burning for agricultural reasons. The suspected chain reaction is grazing, burning and firewood picking led to the loss of a primary food source has led to the possible extinction of the Blue-bearded Helmet-crest.

Helmetcrests feed on nectar from the Fraijelon and will defend their feeding area vigorously against other birds and large insects. It will build nests inside the plant or uses plant material extensively as nest building material. During the breeding time it is known to feed on small insects.

We, at Planetofbirds, think this little gem is gone, mainly because of the loss of suitable (breeding) territory. Also the continued disturbance by cattle, fires and indigenous people, and in the end, lack of food. Now, almost 70 years after the last sighting, some still are hopeful. This isolated, highly specialized amazing creature is not to be found, yet another human invoked genocide.