This species has not been seen in the wild, other than some unverified observations, since 1949. Already in the 19th century it was mentioned as rare. It is now considered at the brink of extinction or already extinct because of hunting and habitat loss. In the past decennium it has been much sought after, f.e. Tordoff in 2008, Eames in 2009 and Thorn in 2014. Nevertheless it has not been found, any remaining population is likely to be tiny, and consequently it is treated as Critically Endangered. Surveys are needed of remote wetlands in northern Myanmar where there has been a possible recent sighting and local reports were received in 2006.

Finn wrote in 1915: “When I was in India in the nineties, one could generally see about half-a-dozen in the Calcutta market in a winter, though as much as Rs. 15 each would be asked for them; they were kept alive, having a well-known value as ornamental birds; but now, I am told by friends from Calcutta, that an offer of Rs. 100 per bird would probably not produce a single specimen”.
According to Blanford in 1923, “is fairly common in the districts of Purnea and Bhagalpur and in Tirhoot, and occurs throughout Bengal Assam and the. During the ten years I have spent in the Uppar Pradesh. I have never come across this bird. Apparently it is gradually becoming extinct, and should therefore not be shot”.
Eames in 2006: Conjecture from researchers conducting surveys for the species has suggested that it may be nocturnal, explaining the difficulty in locating it, and the reason behind its unique colouration.

Range described in 1922 (John Phillips): With the exception of a very restricted area on the Ganges, this species appears to be everywhere rare. The area which all writers agree is its chief habitat, is located north of the Ganges and west of the Brahmaputra. In this region the species is common. Elsewhere it is found rarely throughout the rest of Bengal nor the valley of the Brahmaputra. Range described in 2014 (Birdlife): Rhodonessa caryophyllacea was locally distributed in the wetlands of India, Bangladesh and Myanmar, and occurred rarely in Nepal, with most records from north-east India and adjacent Bangladesh. 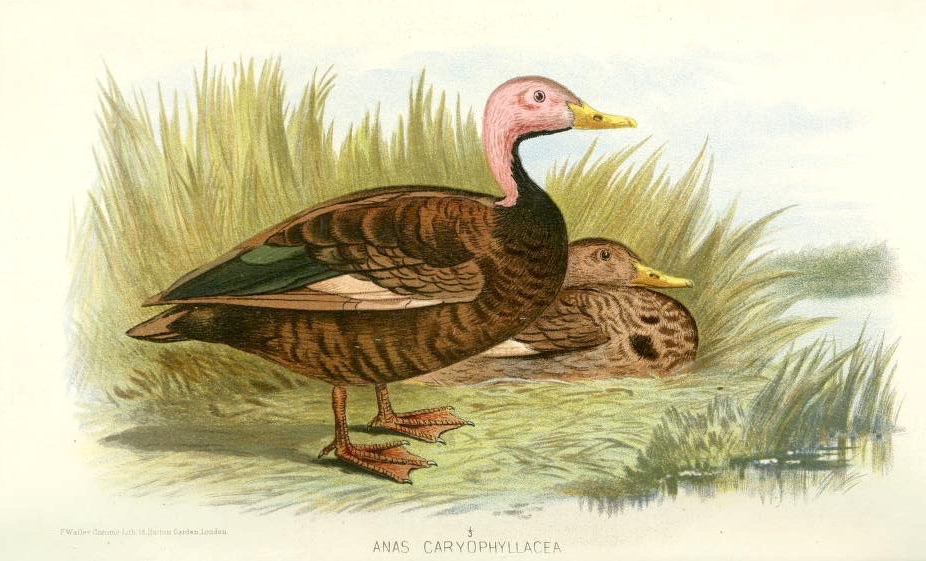 Identification from Finn (1909). Its colouring, however, is unique, not only among Ducks but birds in general. The male’s plumage is generally of a glossy sepia, with buff wing-bar, and the pinion-quills also shaded internally with buff ; the head and neck, with the exception of a broad black band down the throat and front of the neck, are of a most crude and brilliant rose-pink, which does not harmonize at all well with the bright red eye, and white beak shading into flesh colour at base and tip. The female, though less striking in appearance, much resembles the male. She is, however, duller throughout, the pink of the head being especially dull and dirty ; there is no black on the throat, but a black streak along the crown. This mark the male assumes when not in full colour. The bill of the female is black, with a cream bar between nostrils and root ; eye duller than in male.

It frequents, in small or moderate-sized flocks, weedy ponds and swamps, generally those surrounded by jungle, and nests on the ground in high grass in June and July. The eggs are quite unique, white and spherical in shape like billiard balls, about nine are laid. It is shy and secretive, inhabiting secluded and overgrown still-water pools, marshes and swamps in lowland forest and tall grasslands and, in winter, also lagoons adjoining large rivers. Outside the breeding season it was usually encountered in small groups and occasionally flocks of 30-40. Some, and possibly all, populations undertook local seasonal movements, resulting in scattered historical records as far afield as Punjab, Maharashtra and Andhra Pradesh in India. 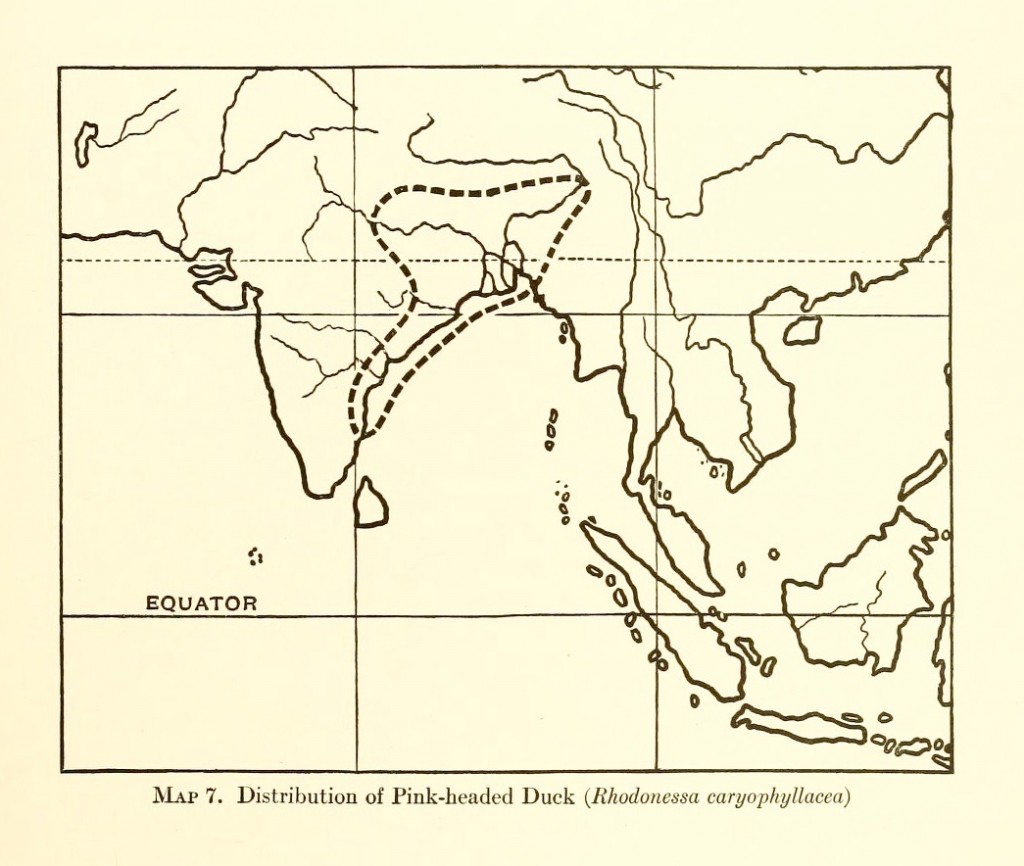 Its decline likely resulted from habitat loss. It suffered year-round persecution during the late 19th and early 20th centuries when hunting levels in India were high. Hunting pressure alone is unlikely to have caused the species’s possible extinction. While the species was hunted historically, the role that this has played in its decline remains uncertain. The invasive alien species water hyacinth may have contributed to its decline by altering wetland habitats to the detriment of this species.
The last reliable sight record of the duck as being one in June 1935 by C. M. Inglis in the Darbhanga district of Bihar Province, India. Since then there have been several unÂ­confirmed reports of the duck from north Burma close to the borders with Assam. One record comes from Putao District, Kachin State, saw about five ducks in some rapids of the Mali Kha River, near Machanbaw (in Kachin State close to the Burmese-Tibetan border) in the winter of 1965-1966. It is possible that the duck survives in the Land of Jove area of Tibet. Confirmation of the status of the Pink-headed Duck in north BurÂ­ma, is difficult, since visas for foreigners are unobtainable. Also the area is even restricted for the Burmese due to local hostilities. The habitat in which the species is presumably observed is not at all typical of earlier accounts. Obviously, however, if the PinkÂ­-head still exists, it will be in some unspecific habitat, or the search parties of the last decade would have found it. 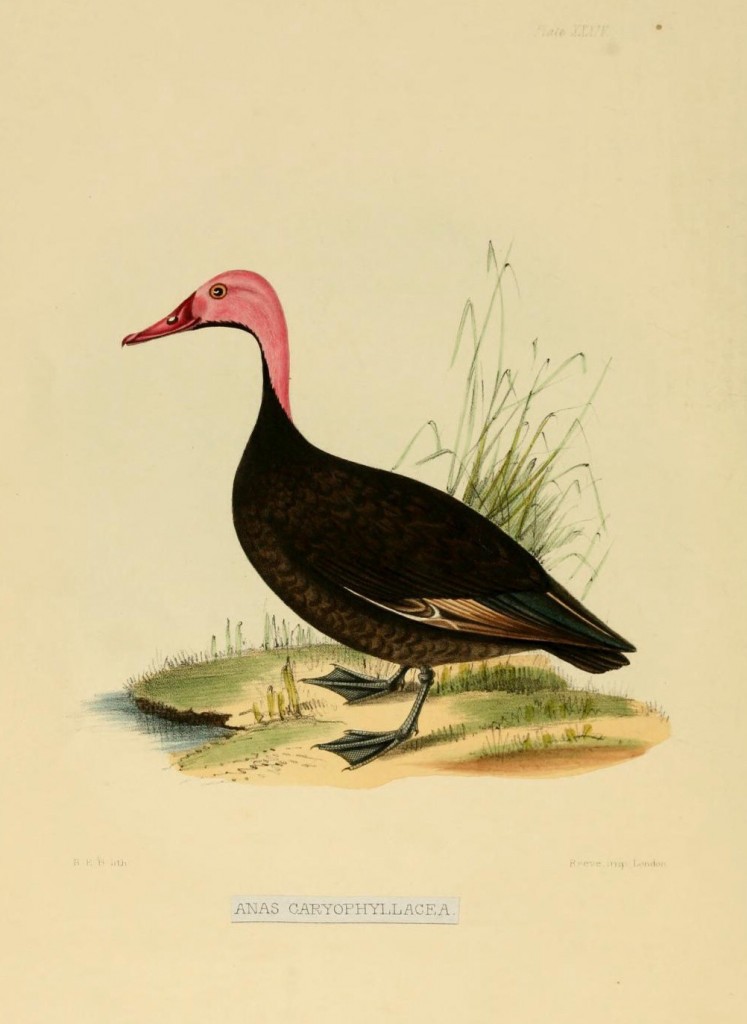 We, at Planetofbirds, think it is all invane, the Pink-head has become extinct. It did not breed in captivity, probably a sign of a highly ecological sensitive species. The bird remains somewhat of a taxonomic riddle, it has a set of physical adaptations not shown in other Ducks, which adapted it to a specific habitat. It is a sedentary species, only known to show some seasonal movement. Putting it all together, it really never had a chance of surviving human, hunting and invasive species pressure. It was simply a too complicated species.