This species was not uncommon in the end of the 19th century and first half of the twentieth century. In 1960 it had already completely vanished, with some vague records during the following decades. Several major surveys have been conveyed but without any success. Then, in 1991, a single drake was captured alive. In 2006 following the last sighting in 1991. However, in 2006 the species was rediscovered when nine adults and four juveniles were observed at a volcanic lake 330 km north of the last known site, Lake Alaotra. It is currently known from a single location where 29 mature individuals were seen in 2011.

This species account is written by Phillips in 1922: Adult Male: Nearest to the Common White-eyed Duck but differs in having the whole head and breast much darker chestnut. There is no white spot on the chin and no distinct collar around the neck. Scapulars not freckled with brown as in the White-eye. White of the abdomen not so well denned or sharply marked off from the breast. The feathers forming the white speculum-patch are distinctly edged with black on the outer margin. Iris white or nearly white. Bill black. Legs and feet black. Adult: Female: Similar to the male. Soft parts same color as in male. Size equal to male.
This species is confined to Madagascar, where it does not appear to be common. Nothing is known about this duck in its native haunts and it seems only to be known from the north and east of the island. 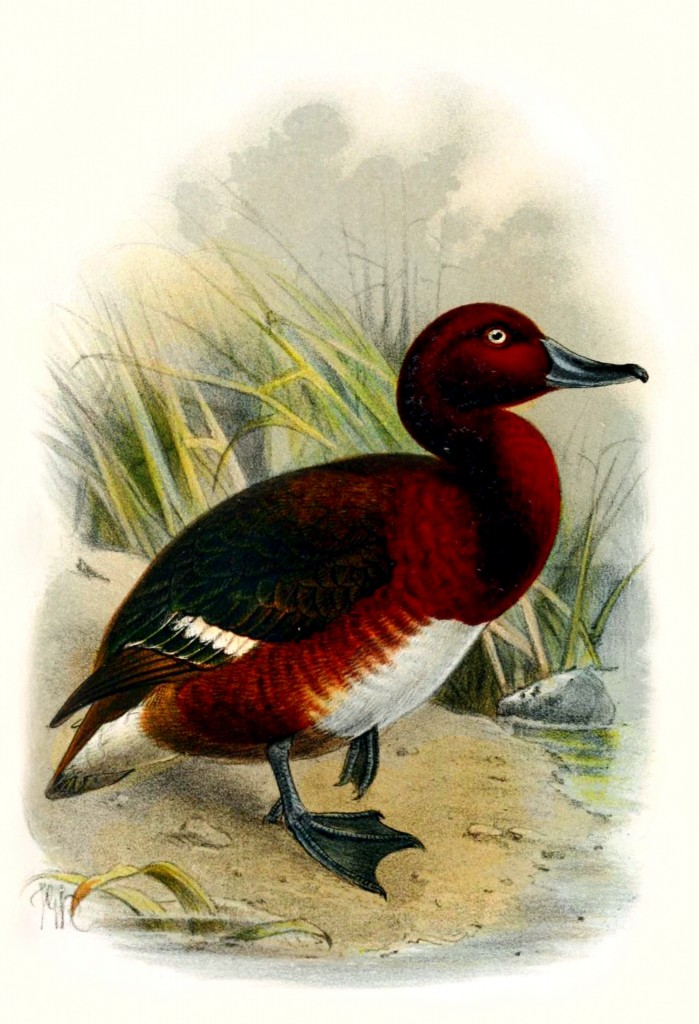 In 1989 Smith and Young conducted a large survey. In their writing they speculate on the Pochard’s rapid decline:
“Delacour (1966) had described a lake (Lake Alaotra) well vegetated with water lilies and extensive beds of papyrus, broken by a network of pools and channels. Today, the lake area supports an escalating human population dependent upon rice-growing. Huge tracts of papyrus marsh are continuing to disappear to make new rice fields and grazing for Zebu cattle and pigs. The surrounding hillsides have been extensively deforested, resulting in rapid soil erosion and the silting up and increased turbidity of the lake. Sport hunting of wildfowl, a comÂ­mon practice during Madagascarâ€™s French coÂ­lonial period, has been replaced by subsistence trapping of all aquatic birds. Intensive fishing throughout the lake, including the use of gill-nets, has also affected bird populations.
The most significant recent ecological change has followed the introduction of exotic fish, particularly Tilapia in 1955. This fishâ€™s voracious appetite has deÂ­stroyed large areas of the aquatic vegetation, particularly the water lilies and with them the associated food chains, resulting in the loss of several species of bird.” The survey did not locate N. Innotata.

Then the bird was recovered in 1991, it was netted. Lucienne Wilme writes in her account in 1993: “It was most astonishing that one was captured alive on the lake by some fowlers in August 1991. The bird, a male in adult plumage, was netted on 29 August 1991 along the western-central edge of Lake Alaotra. The fowlers responsible for the bird’s capture have many years’ experience trapping ducks on Lake Alaotra, and regularly catch up to sixty birds per week with mist-nets placed in or near rice fields. After the Madagascar Pochard was caught, it was shown to other active fowlers and fishermen in the immediate vicinity of Anororo, and no one was familiar with the species. The local fowlers were acquainted with a public education programme about the Madagascar Pochard initiated in 1989 by me in the Lake Alaotra area and thus they understood the importance of their find. The duck was transferred to Antananarivo on 30 September 1991, where it is currently held in an aviary.”

The Madagascar Pochard again disappeared, only to be found again in 2006, this time more were found, Roland wrote in her 2006 account: “On 1 November, an unusual duck with bright white eyes was found in the middle of the Lake. It was in the company of White-faced Whistling Ducks, Red-billed Teal, Meller’s Ducks and Madagascar Little Grebes. It was observed from 14.00 to 17.45h using binoculars and a spotting scope, and the observers concluded that the bird was a Madagascar Pochard. During the following two days, 13 individuals were observed and photographed, comprising five males, four females and four young of c. 2 weeks old, which always kept close to an adult female. Adult males had dark brown plumage which became whitish on the belly and undertail-coverts, gleaming white iride and a lead grey bill with a black nail. Adult females were duller with dark brown irides; bill and nail colours were the same.Both sexes exhibited a conspicuous white wingbar in flight.” 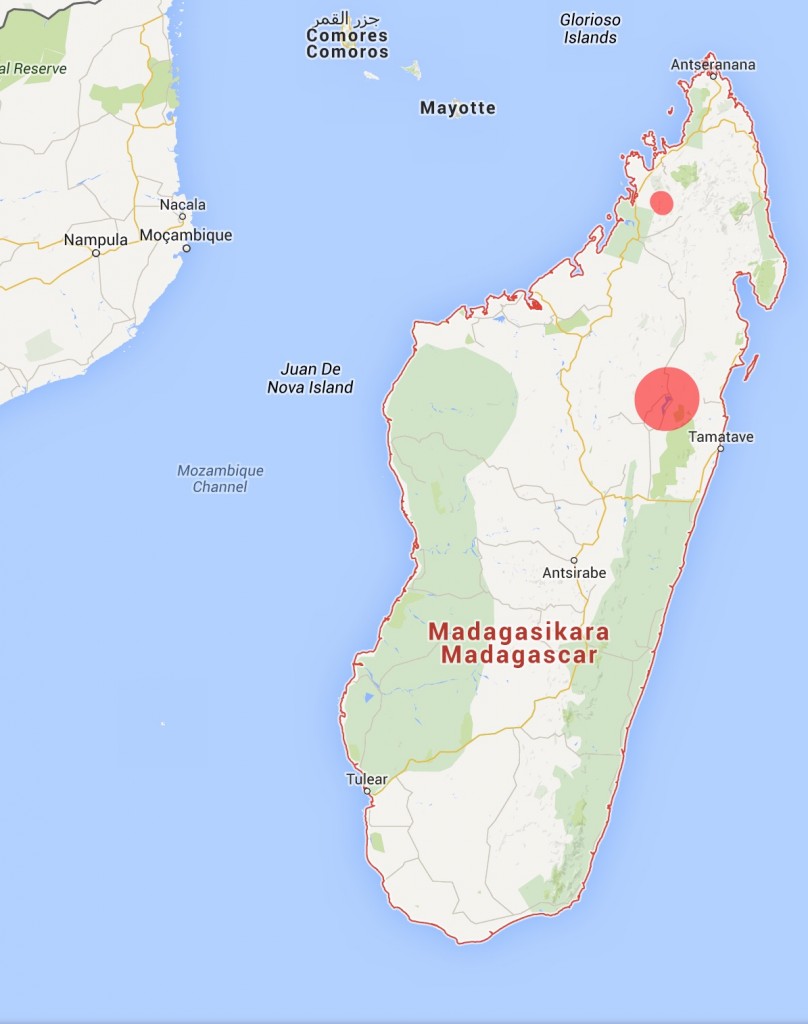 The habitat the species was rediscovered in, supports that the earlier mentioned habitat destruction is the main reason of the species diminishment, Roland continues: “The lakes where the pochard has been rediscovered are surrounded by pristine tropical forestand grassland with no evidence of human disturbance or degradation.The lack of disturbance is suspected to be the main reason for the pochard’s survival in this region.The population has probably been at this site for many years, given the lack of avifaunal (and other faunal) surveys of this region,with all previous searches for the pochard concentrating on the environs of Lake Alaotra. This was considered pochard habitat, due to the presence of abundant emergent vegetation and numerous quiet pools. The new site lacks emergent vegetation and fish. The site comprises four shallow lakes, with the main lake varying between1.5 to 3.0 m deep, and supporting a benthic flora and fauna suitable for pochards.There is no competition from exotic fish (Tilapia) as at Lake Alaotra, and there is no hunting.”

Follow-up surveys in 2006 located c.20 mature individuals with up to nine ducklings observed at the same site. A total of 25 mature individuals were counted in 2008, with six pairs nesting in the 2007/08 season. However, no chicks fledged in 2008 or 2009, and only 19 adults were recorded in July 2009. In 2011 there was again no successful breeding, and the lake was apparently in poor condition with little available food other than caddis fly larvae, however a total of 29 mature individuals were counted.
What vegetation does grow at the lake edge may provide suitable nesting habitat. The requirement for shallow water may prevent it from using other volcanic lakes similar to the site of its rediscovery. The nest is sited amongst lake-edge vegetation (Cyperaceae) and placed 10-20cm above water. The clutch size is 6-10 eggs. It is believed to feed on benthic invertebrates and aquatic plants and seeds by diving frequently in shallow water.

Previous declines have been attributed to the widespread loss of habitat through siltation and conversion to agriculture throughout the central plateau. Soil erosion from deforested hillsides and more intensive agricultural practices have diminished the water quality of the lake. Introductions of exotic plants, mammals (Rattus) and fish, especially Tilapia, have depleted essential food supplies and likely increased nest-predation for the species. The introduction of Tilapia into Alaotra probably had a devastating effect on the pochard and other more widespread waterbirds preferring emergent vegetation. Some of these species apparently died out at Alaotra but have repopulated from other parts of their ranges as water-lilies and other emergent vegetation have made a comeback along the marsh’s southern edge. 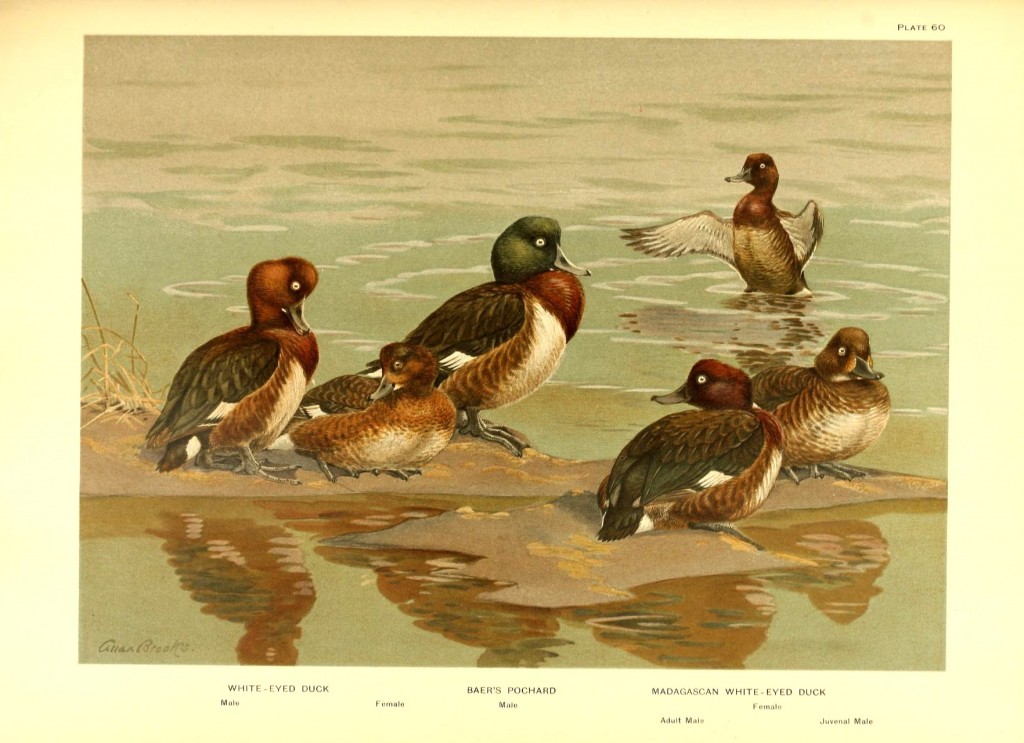 Currently, a conservation breeding facility has been built, and a Malagasy warden was to be appointed to help protect the breeding site. A small number of eggs were opportunistically taken from the wild in 2009, leading to hatching of the first captively-reared individuals, with three clutches successfully hatched by the end of the year, producing 20 young. The long-term aims of such efforts are to secure of the existing population, establish another viable population in the wild and identify potential areas for the release of captive-bred birds, which will probably necessitate some habitat restoration.

We, at Planetofbirds, reading all the literature, are convinced this species will survive. It wil be the next species only able to survive because men’s hand will feed it. This Pochard, other than the Pink-headed Duck, is capable of adapting to captivity. Also the species was capable of exploring new breeding ground, survive with little food and will do “well” in a Duck Reservation. Freedom, or a prisoner in its own haunt? Luckily, that is a human consideration, not an Anatidae one.