Source to all birds on the Planet
admin
Anatidae, Anseriformes, conservation
Comments

This Duck was found by my collector on Laysan Island only. The captain who told Dr. Finsch that there was a flightless Duck on Laysan Island no doubt referred to this species, but on account of its extraordinary tameness he was led to believe that it could not fly. It flies, however, well enough. Kittlitz, in his article, says that it was observed on Laysan and Lisiansky, but Palmer did not notice it on the latter island. According to Palmer’s observations, this Duck was generally seen in pairs, but sometimes a dozen or more would sit round a freshwater well. They are very tame, often walking up to the front of the house. They were never observed in the water, though often on the beach. They frequented the scrub all over the island, but were not very plentiful. June seems to be their breeding-season.

About 120 years later the Laysan Duck is on the near brink of extinction. It is now extremely rare, still dependent on freshwater and scrub vegetation. In current day docility is not mentioned as a trait of the species. This might, however, be a factor as it usually means no adaptation behavior towards introduced predators. 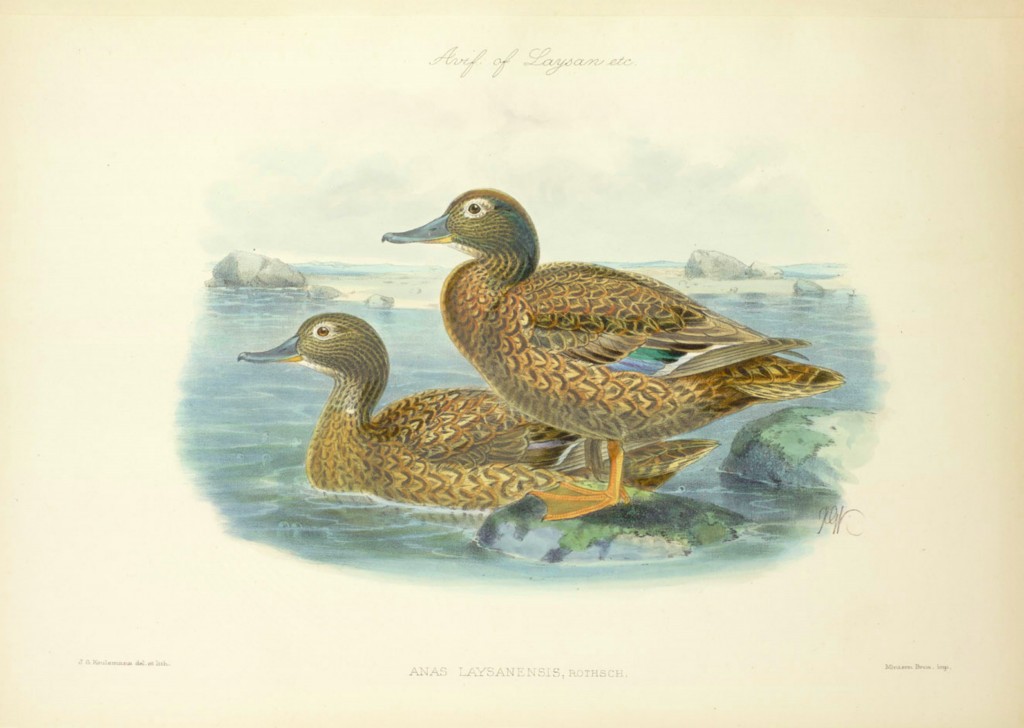 This species’ population exhibits extreme fluctuations within its extremely small range. The population was increasing following the successful reintroduction of birds to Midway Atoll. Outbreaks of avian botulism combined with the 2011 tsunami have caused major setbacks to the recovery.
It is a 41 cm, very small, dark duck. Dark head, with some adult males showing slight iridescence, a conspicuous white eye ring. Rest of body is chestnut mottled with dark brown. The speculum appears teal green, or blue. A dark green bill in male, brownish-pale in female.

This Duck is endemic to the Hawaiian Islands, now only on Laysan. The birds do not disperse from Laysan today, it was most recently became extinct on Lisianski Island about 150 years ago. The species was near total extinction at the beginning of the 20th century, but the population had increased to 500 individuals, following the removal of introduced rabbits from Laysan. In 1993, there was a complete breeding failure and severe die-off owing to drought and disease. Since then the population slowly increased, to about 521 birds in 2010.

When the Laysan population reached its capacity, 42 individuals were moved to the two islands of Midway Atoll in 2004 and 2005. The birds bred successfully and the population grew to a total of 104 individuals in 2006, reaching c.350 in 2010. The total population on Laysan was estimated over 500 birds in 2010.

The species is non-migratory and characterised by female-only parental care and high adult survival. On Laysan, long-term pair bonds are common, and 3-4 eggs are laid per clutch. It selects different habitats during different times of the day. It nests and rests in dense stands of shrubs and grasses. It feeds foremost on invertebrates, but also grass and sedge seeds, and some algae. Duckling survival is low on both atolls.

Additional populations on different islands are needed to reduce the extinction risk to small concentrated populations from alien predator introductions, tsunamis, and hurricanes.

In March 2011, an earthquake off the east coast of Japan triggered a tsunami that arrived at the Northwestern Hawaiian Islands. A botulism outbreak followed due to the more than 110,000 dead albatross chicks left by the flooding. Most of the vegetation on Eastern Island was lost. Following the tsunami, the population underwent complete reproductive failure. Other threats are disease outbreak, drought and alien invasive plants threatening nesting and wetland habitat. 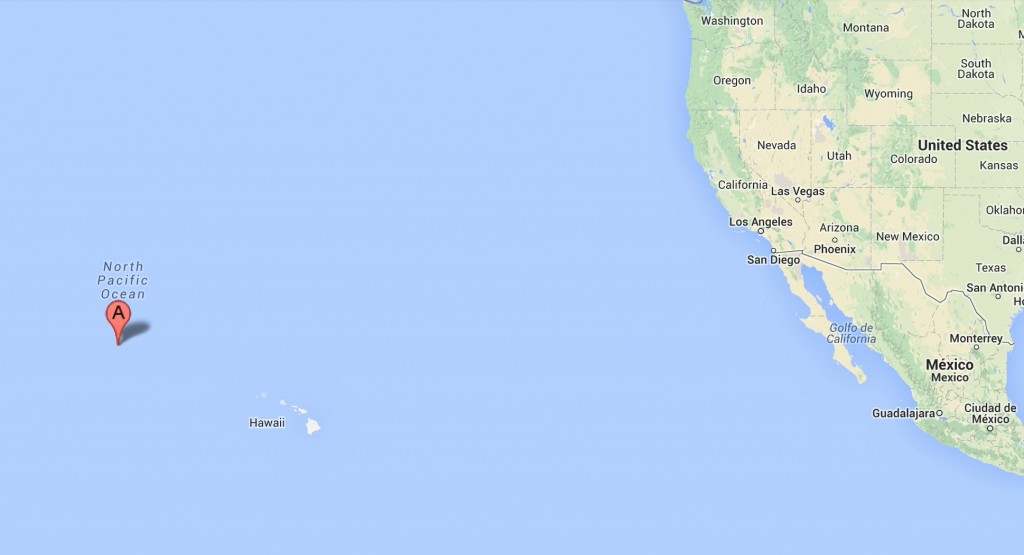 To counter these threats, eradication of alien grass and introduced mammals is performed. In 2004-2005, 42 wild birds from Laysan Island were released on Midway Atoll and many bred successfully in the first season. Following the success of the releases on Midway, the next translocation will be to the Kure or Lisianski islands in the North West Hawaiian Islands to establish a third population.

In the near future to prevent extinction four additional populations of Laysan Ducks are to be established. On Laysan planting native vegetation to strengthen dunes. Strict procedures to prevent the accidental introduction of exotic plants, invertebrates and animals and if possible vaccinating at least some birds in the Midway Atoll population against avian botulism.