Source to all birds on the Planet
admin
Anatidae, Anseriformes
Comments
This species is classified as Critically Endangered as it is now absent or occurs in extremely reduced numbers over the majority of its former breeding and wintering grounds and is common nowhere. It is thought that hunting and wetland destruction are the key reasons for its decline.

Identification Phillips, 1922
Adult Male : Head and neck dark metallic green except on the lower neck where the color becomes a dead black. There is a small white spot on the chin. The mantle is black down the middle, but on the sides it is ruddy chestnut like the breast. Scapulars very dark brown, indistinctly speckled with very fine brown dots. Back, rump, upper tail-coverts and tail, black. Breast ruddy chestnut running into brown on the sides and flanks. Abdomen pure white sharply contrasted with the breast color, except the lower part which shades into a brownish color. Under tail-coverts white; outer wing-coverts black; speculum white, but framed posteriorly by a black band formed by the tips of the secondaries. Primaries dark brown on the outer web and tip, pearl gray on the inner web. Tertials black, marginal under wing-coverts dark brown, remainder of under wing-coverts white like the axillars. 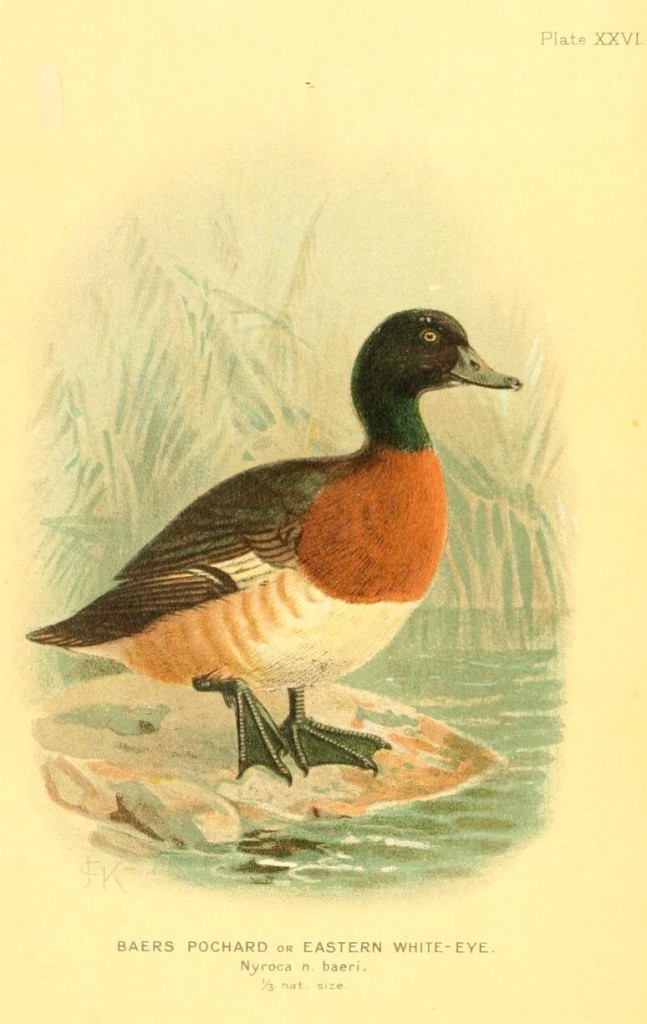 Adult Female: Similar to the male but head and neck less glossy; a chestnut patch on the anterior part of the face, near the base of the bill; upper breast of a duller chestnut, dark brown, without narrow wavy lines; brown base of the abdominal feathers more extended (Salvadori, 1895). The eye is said to be darker than in the male (Finn, 1901), gray or brown. Perhaps it is white in old females (Baker, 1921). The bill and feet are not so bright in color as in the male.

Even today little is known about this species habits or even realms. Birdlife writes:

Aythya baeri breeds in the Amur and Ussuri basins in Russia and north-eastern China. It winters mainly in eastern and southern mainland China, India, Bangladesh (maximum winter total of 17 individuals in the last five years , down from 1000 – 2000 individuals). It is very rare or become absent is Myanmar, Japan, North Korea, South Korea, Hong Kong, Taiwan, Nepal, Bhutan, Thailand, Vietnam and Mongolia. The total population is now likely to be fewer than 1000 individuals, even as low as 250. 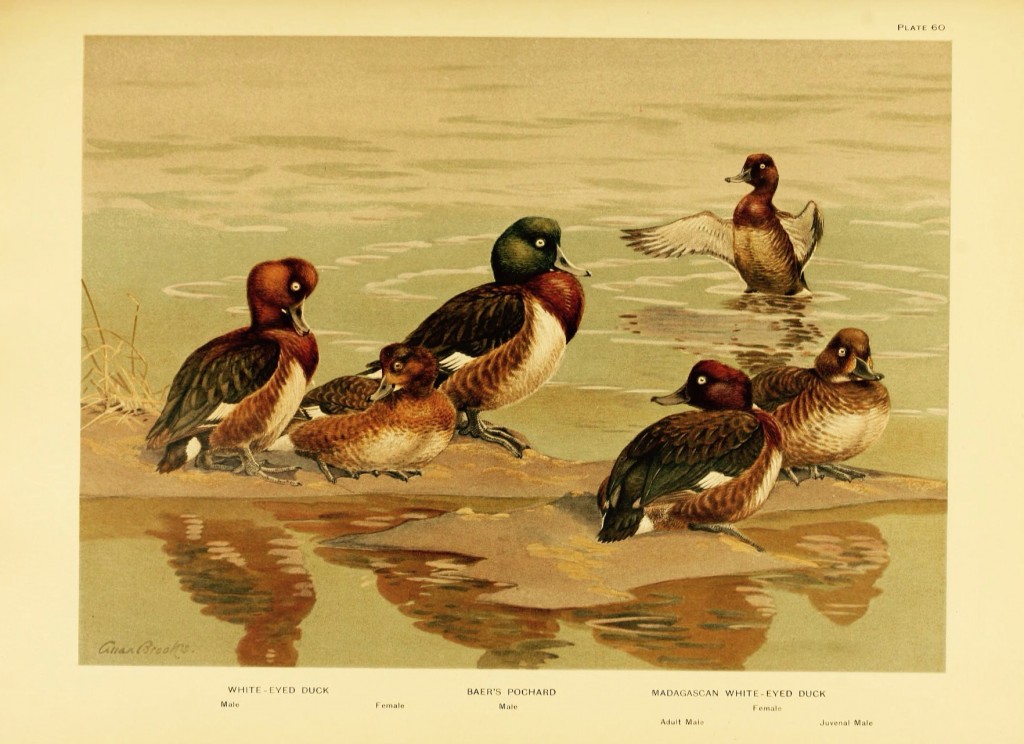 It breeds around lakes with rich aquatic vegetation in dense grass or flooded tussock/shrubby meadows. In Liaoning, China, it is usually found in coastal wetlands with dense vegetation, or on rivers and ponds surrounded by forest. The nest is built on a tussock or under shrubs, sometimes floating, and occasionally amongst branches. In winter, it occurs on freshwater lakes and reservoirs.
Threats are poorly understood, but hunting and wetland destruction in its breeding, wintering and staging grounds are probably the reasons for its decline. In several cases, the loss of populations from former important areas have been preceded by low water levels or complete drying up of water bodies. There are unconfirmed reports of high mortality from hunting, including a report of 3000 individuals being shot annually in China; however, this is very likely an overestimate and may be due to the translation of the species name (Baerâ€™s Pochard is synonymous with Mallard in Chinese). Incidents of hunting by the use of poisoned baits have been recorded at wintering locations for Baer’s Pochard in Bangladesh.