Source to all birds on the Planet
admin
Passeriformes, Thraupidae
Comments

This species went undetected from 1938 to 2003, but was then rediscovered in gallery forest in Emas National Park, Brasil. It has since then been found at several sites along the Alto Rio Juruena, where it was originally discovered, and at Itiquira. The species habits and preference are hardly known, it probably has a very small range and a tiny population. Because its habitat (stronghold is the Alto Rio Juruena) is threatened both its range and numbers are most likely declining. It is considered critically endangered, but further surveys may find it more common in suitable habitat. The species was discovered by 1938 by A. Vellard and described by J. Berlioz in the Bulletin of Ornithology in 1939.

Berlioz writes: “I feel it more convenient actually to consider this bird, of which unfortunately a single specimen was secured, as a new generic type, RHYNCHOTHRAUPIS, gen. nov., with no near ally and a somewhat doubtful systematic position, its bill being more icterine in shape than tanagrine or fringilline ; but its weaker feet, its plumage, general appearance, and pattern are closest to those of the Tanagers. It differs from most of the South American Tanagers and Finches by stouter bill (somewhat intermediate in shape between Arremon and Dolichonyx, and even comparatively larger, considering the size of the bird). 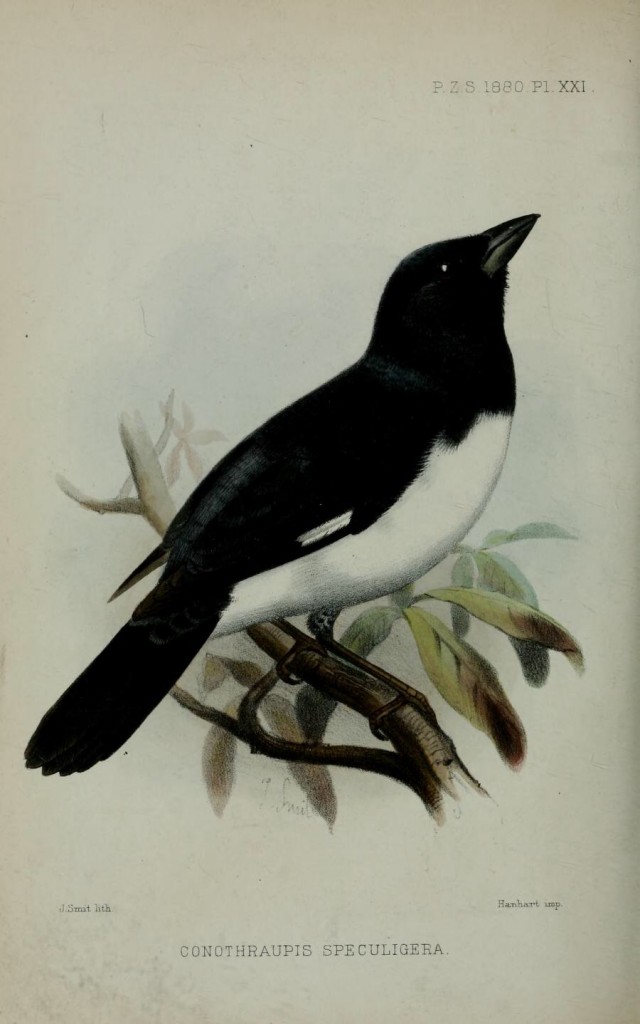 Finch-like bird with general plumage, including wings and tail, uniformly deep black, slightly glossy on the upper surface owing to the shiny fringes of all the feathers. On the throat a small concealed patch of white at the base of the feathers. A large elongated area of pure white occupies the middle of breast and belly, and merges posteriorly into the mixed black and white vent, thighs, and proximal under tail-coverts, the longest of which are nearly entirely black. Inner and longer under wing-coverts whitish. Wings rounded, the fourth quill the longest. Tail rather short and rounded,
the rectrices wide and soft.
Bill high at base, stout and conical, compressed laterally; culmen nearly straight, produced on front into a distinct and slightly flattened mesorhinium; nostrils rounded and exposed. Bill apparently bluish-grey, becoming whitish along the tornia. Feet greyish-black.

Type and unique specimen (in the Paris Museum). Male adult, collected at Juruena, north-east of Cuyaba, Matto Grosso (Central Brazil), in dry forest, on August 25, 1938, by Dr. A. Vellard.
Until better known this bird can be placed among the Tanagridae, not far perhaps from the rare Conothraupis speculigera (Gould) from Peru, both representing aberrant types, with a somewhat similar pattern. ”

After its discovery it went unseen until the 21st century. In 2003, the species was rediscovered in gallery woodlands in Emas National Park, Goias. In 2006 another population, of about a 100 individuals, was found 900 km away along the Alto Rio Juruena, Mato Grosso. The female then was mist-netted and described by C. E. Candia-Gallardo:

It favors bushy vegetation in dry forest in the transitional zone between Amazonian rainforest and central Brazilian cerradao (closed-canopy cerrado). Evidence from Emas National Park suggests Cone-billed Tanager favours gallery forest and is strongly associated with water and with permanently or seasonally flooded areas of forest or grassland near rivers. The species appears to be territorial and sallies for small flying insects and feeding on seeds.

We end with Birdlife: The rarity of this species suggests that some unknown factors have affected its status. At least until recently, there appears to have been extensive areas of the various possible habitats. The rediscovered population is in gallery forest, and if dependent on this habitat it is likely to have suffered from clearance and degradation through agricultural expansion and mechanisation in the region. The spread of soya cultivation in particular poses a serious threat outside Emas National Park. If the species does indeed rely on flooded riverside habitats, its population may be naturally fragmented owing to the fragmented and linear nature of suitable areas; however, in this case habitat loss would be a major threat. An upcoming hydroelectric project planned for Bacia do Alto Juruena and involving the construction of five hydroelectric plants will flood the Juruena river area, which appears to be the global stronghold for the species.