Source to all birds on the Planet
admin
Africa, Psittacidae, Psittaciformes
1 Comment 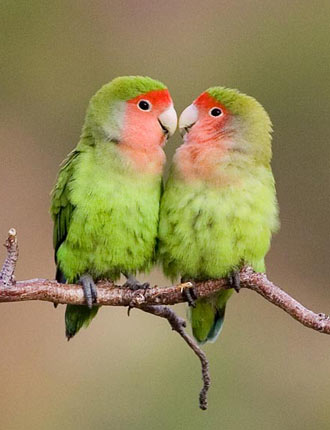 Agapornis, an African genus of parrots allied to Loriculus of Asia, has usually been classified in nine species. Five species in the African lovebird genus Agapornis are the only parrots, other than Monk Parakeets (Myiopsitta monachus), that construct nests. Four species (A. personata, A. fischeri, A. lilianae, and A. nigrigenis) build domed nests within cavities, and a fifth (A. roseicollis) builds a cup-shaped nest within a cavity. The other members of the genus have nesting behavior that is more typical of other parrots: A. cana and A. taranta nest in cavities that are lined with nesting material, and A. pullaria excavates burrows in arboreal ant or termite nests. Eight species are native to the African continent, while the Grey-headed Lovebird is native to Madagascar. Their name stems from the parrots’ strong, monogamous pair bonding and the long periods which paired birds spend sitting together. Lovebirds live in small flocks and eat fruit, vegetables, grasses and seed. Black-winged Lovebirds also eat insects and figs, and the Black-collared Lovebirds have a special dietary requirement for native figs.

This species shows age-related and, to a lesser extent, sexual variation in coloration. Males have rosy pink foreheads, chins, throats, upper breasts and cheeks. The remainder of the body is typically bright green, although the underside is slightly lighter. The feet are a mix of greenish-grey and the bill is horn-colored. The rump and the feathers covering the tail are bright blue; the tail feathers themselves are green with blue tips, and all but the central feathers have a black band with red patches toward the end. The females of this species are very similar but slightly duller in color. The young initially have much paler faces than adults. Birghter feathers erupt after their first molt at around 4 months of age. Also, the upper mandible of young birds is black at first, only later becoming the horn-color common in adults.

Listen to the sound of Rosy-faced Lovebird

Dry, open and wooded country to 1 500 m., incl semi-desert shrublands, riparian woodlands and cultivated lands; highly dependent on water. Common in rocky areas of the Namibian escarpment. In Angola, ranges north along arid coastal plain, but never far from water. Fairly common along Guab R, near Klein Karas, Namibia. Absent from very open habitats, incl dwarf scrub savanna around Etosha Pan and the Namib Desert sand sea. The species has a strong association with mopane Colophospermum mopane woodland in the south of its range, but also inhabits belts of Acacia on aluvium and riparian forest, and frequents fig trees in the north of its range.

In this species pair formation is very rapid and can occur at as early an age as two months. Pairs formed between siblings are not uncommon. Females are dominant and males wait for female approval before approaching. Females show this approval by assuming a fluffed position.

Males feed their mates during courtship. Because feeding is an important component of the interaction between mates, males use head bobbing, similar to the movement used in feeding, to attract females. Scratching is also used during courtship. A male will position himself near a female and scratch her head, especially the area around the beak and the beak itself. When a male is trying to approach a female, he creeps towards her in a sideways fashion known as sidling. If she appears aggressive, he tries to approach from the other side in a process known as switch sidling; however, if she seems receptive he continues sidling toward her.
Agapornis roseicollis has been observed to be a seasonal breeder in the wild, but in captivity can breed year-round. Its eggs are typically 23.5 x 17.3 mm. On average, 4 to 6 eggs are laid in one season. In captivity as many as 8 have been laid. Eggs hatch after about 23 days of incubation, and young fledge at about 43 days of age. The young begin to form pairs at around 2 months of age, and also begin to seek their own nests at this time.
Eggs are laid every other day during the breeding season. Beginning when the first egg is laid, a female spends the majority of her time in the nest incubating the eggs. Males often bring their mates food during the period of incubation. The average incubation period is 23.3 days. After the young hatch, a female regurgitates food brought to her by the male to feed the young. Food that the young eat has therefore been regurgitated twice. Starting midway through the nestling period, which lasts between 5 and 6 weeks, both parents feed the young directly. Little is known about the behavior of wild A. roseicollis in regards to parental investment after fledging. In captivity, the young remain dependent upon the parents for two more weeks and frequently fly back to the nest to receive food; this happens for as long as the parents permit. When the young leave the nest, after around 42.8 days, they are fully feathered and able to fly. Agapornis roseicollis shows variability in both nest choice and nest usage. In the wild, these birds commonly breed in the large, communal nests of sociable weavers. They also use the nests of white-browed sparrow-weavers. It is not known if A. roseicollis forces these other birds out of their nests or if they use vacated nests. In captivity A. roseicollis pairs build their own nests. A female prepares strips of bark by cutting them with her beak into relatively uniform shapes and sizes. To carry the bark to the nest site, a female tucks them into the feathers of her rump. Together the male and female build the nest in the shape of a deep cup using bark, leaves, and grass.

Agapornis roseicollis typically feeds on seeds, especially seeds native to its habitat, such as those from Albizia and Acacia. It eats the seeds by either picking them off growing plants or by picking them up off the ground, then husking them rapidly using the tongue, mandible and the cutting edge of the maxilla. It feeds on flowers by plucking them from trees and clipping off the petals and stamens with the beak. This species is known to drink water several times per day in order to cope with the demands placed upon it by the hot, arid habitat in which it lives.

This species has a very large range, and hence does not approach the thresholds for Vulnerable under the range size criterion (Extent of Occurrence <20,000 km2 combined with a declining or fluctuating range size, habitat extent/quality, or population size and a small number of locations or severe fragmentation). Despite the fact that the population trend appears to be decreasing, the decline is not believed to be sufficiently rapid to approach the thresholds for Vulnerable under the population trend criterion (>30% decline over ten years or three generations). The population size has not been quantified, but it is not believed to approach the thresholds for Vulnerable under the population size criterion (<10,000 mature individuals with a continuing decline estimated to be >10% in ten years or three generations, or with a specified population structure). For these reasons the species is evaluated as Least Concern.
It is unlikely that any range contraction has occurred during the 20th century, and that it is more likely that populations have increased with the provision of water points in previously dry areas, and artificial structures in which it can nest. However, there has been a historic decline due to trapping and the export of thousands of birds from Angola is believed to have greatly contributed to a reduction in its populations in the southern part of that country. Common aviary bird that breeds well in captivity.