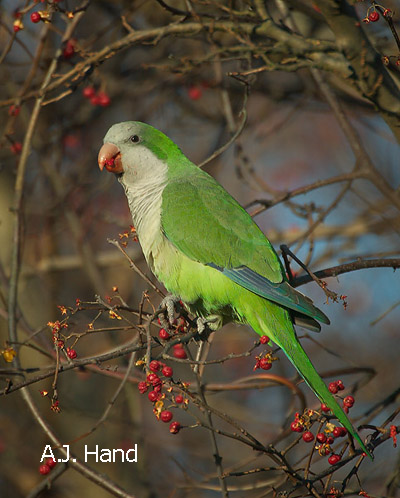 The Monk Parakeet, also known as the Quaker Parrot, (Myiopsitta monachus) is a species of parrot, in most treatments the only member of the genus Myiopsitta. It originates from the temperate to subtropical areas of Argentina and the surrounding countries in South America. Self-sustaining feral populations occur in many places, mainly in North America and Europe

Listen to the sound of Monk Parakeet

Found in dry wooded country or open country with trees including gallery forest, isolated clumps of trees, palm groves, woodlots, savanna and thorn scrub with cacti. Also found in cultivated areas. Feral in some urban areas. Up to 1000m (3280 ft), race luchsi reaching 3000m (9840 ft). Occurs in pairs or flocks of 30-50 birds, with larger groups outside of breeding season. Roost communally, sleeping sometimes in nest outside of breeding season. Feeds in trees and on the ground, mixing with other species of birds such as pigeons and cowbirds.

The Monk Parakeet is the only parrot that builds a stick nest, in a tree or on a man-made structure, rather than using a hole in a tree. This gregarious species often breeds colonially, building a single large nest with separate entrances for each pair. In the wild, the colonies can become quite large, with pairs occupying separate “apartments” in nests that can reach the size of a small automobile. These nests can attract many other tenants including birds of prey such as the Spot-winged Falconet (Spiziapteryx circumcincta), ducks such as the Yellow-billed Teal (Anas flavirostris), and even mammals. Their 5-12 white eggs hatch in about 24 days and the nestlings leave the nest after about 50-60 days

Eats wild and cultivated seeds, fruits and vegetable items such as grass seeds and grain, cactus stems, root vegetables and tree fruits. Also includes insects and their larvae in their diet.