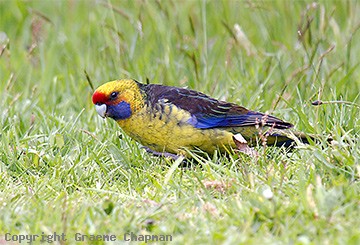 Rosellas are colourful parrot species belonging to the genus Platycercus. All Rosella species are native to mainland Australia or a few nearby islands and inhabit forests and farmlands. They have also managed to adapt well to life near humans and are today found in many parks and gardens. Rosella parrots only live in coastal mountains and plains and are not present in Australia?s outback region. The genus name Platycercus means broad-tailed, reflecting the broad tail seen on Rosellas and other members of the broad-tailed parrot tribe.

Listen to the sound of Green Rosella

Breeding of the Green Rosella is not well known. They lay their 4-6 eggs in a hollow of a trunk, limb or spout (broken dead limb) of a tree, usually an eucalypt. They may compete with Common Starlings for hollows. The nest hollow is lined with wood dust and the birds chew at the entrance to the hollow to widen it. The female may spend several weeks in the hollow before laying and she alone incubates for about 19 days, leaving the nest only to be fed by the male. Young fledge after 5 weeks.

Green Rosellas are mainly sedentary but may wander looking for food and water. Juveniles may gather in large flocks and wander over large areas.