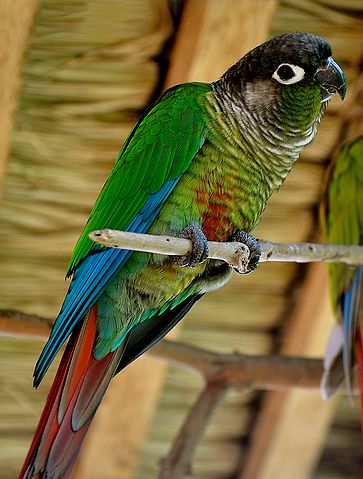 Generally green, Green-cheeked Parakeets have brown on the forehead, nape, and ear-coverts, a bare white orbital ring, green cheeks, brown and whitish scaling on the throat and sides of the neck, a brown and yellow breast, a reddish tail and belly and blue flight feathers.

Listen to the sound of Green-cheeked Parakeet

Residents of deciduous lowland woodland, secondary forest, gallery forest and humid subtropical forest, higher altitude populations descend to more moderate elevations during autumn and winter. These parakeets are common throughout most of their range, with much suitable habitat extant.

Builds nest in tree hole, sometimes only 5 meter up. Clutch size in captivity is 3 eggs which are incubated for about 23 days, young fledge after another 7 weeks.

Gregarious outside breeding season. Seen in flocks of 10-20 individuals and more. Forages in tree-tops. No information on diet.

Resident with some altitudinal movements by the higher living populations.