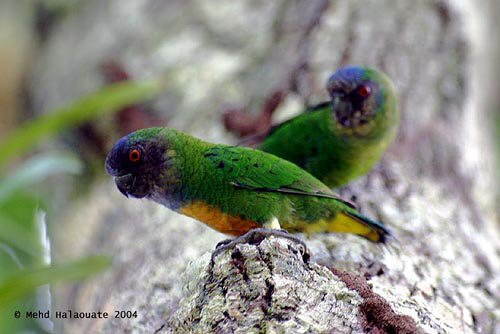 Listen to the sound of Geelvink Pygmy Parrot

Australasia : islands North of New Guinea. Micropsitta geelvinkiana is endemic to the twin islands of Biak-Supiori and Numfor off Papua, Indonesia

It occurs in forest, secondary forest and forest gardens, up to at least 400 m, this species tolerates highly degraded habitats. Found up to 300m (9840 ft) in lowland forest, secondary growth forest, open cultivated areas with isolated trees and gardens.

Breeding period probably from June to August; nestlings at least found in mid-June and end of August; nests in arboreal termite mounds, often only few metres from ground; in one case even at 2 m (6 ft) in dead tree; entrance in lower part of mound; from here a narrow tunnel led round a bend to oval chamber 12 cm (5 ins) across and 7 cm (3 ins) high above entrance; nest lined with thin layer of dust from termite mound; it contained egg shell remains, a few feathers and two almost fully feathered young, which were however at different stages of development; during fledging period adults remained near nest; responded immediately to calls from young; these calls audible for some distance; adults fly first to certain branches to ensure no danger before entering nest; otherwise female visited nest every two hours.

This diminutive parrot is thought to have a moderately small population, and although trends are unclear it is suspected to be declining owing to habitat loss. It is therefore classified as Near Threatened.
On Biak and Numfor, forest is under heavy threat from logging and subsistence farming, but there appears to be large areas of forest remaining in interior Supiori