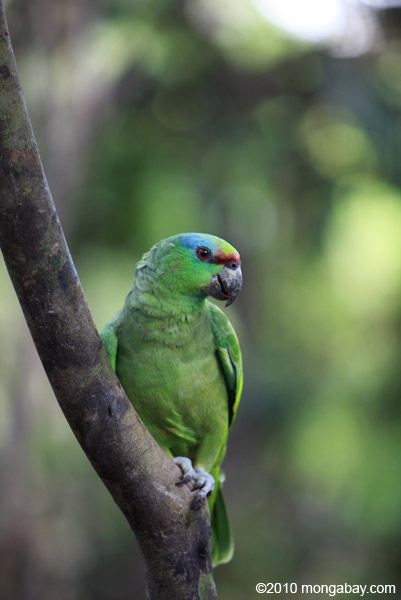 Although solid green overall like other Amazona parrots, they can be distinguished by their lack of a red wing speculum in flight, and their dark reddish lores and eyebrow. Their red rump is also a distinctive field mark, though this is difficult to see when the bird is perched.

Listen to the sound of Festive Amazon

Festive Parrot is fairly local throughout its range. They are almost strictly limited to areas near water, and are rarely encountered far away from rivers or oxbow lakes. They forage in the canopy of varzea forest, but are most often encountered as flyover flocks. Found up to 500m (1640 ft) in varzea forest, riparian secondary growth and river islands. Rarely far from water. Less commonly in gallery woodland or savanna with scattered trees, and plantations.

No data, they forage in the canopy of varzea forest

This species has a very large range, and hence does not approach the thresholds for Vulnerable under the range size criterion (Extent of Occurrence <20,000 km2 combined with a declining or fluctuating range size, habitat extent/quality, or population size and a small number of locations or severe fragmentation). Despite the fact that the population trend appears to be decreasing, the decline is not believed to be sufficiently rapid to approach the thresholds for Vulnerable under the population trend criterion (>30% decline over ten years or three generations). The population size has not been quantified, but it is not believed to approach the thresholds for Vulnerable under the population size criterion (<10,000 mature individuals with a continuing decline estimated to be >10% in ten years or three generations, or with a specified population structure). For these reasons the species is evaluated as Least Concern.
A slow and ingoing population decline in Venezuela is suspected owing to illegal poaching and habitat loss

Habits poorly known, appears to be resident, with possible movements at extreme ends of range; usually in pairs or small flocks, but with large groups gathering at communal roosts for the night or at a localized food source.