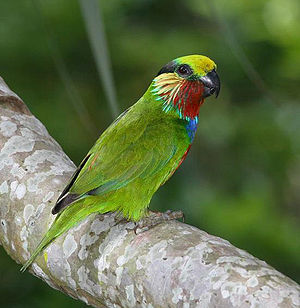 Psittaculirostris is a genus of 3 parrot species in the Psittacidae family found in Indonesia and Papua New Guinea. These parrots are medium sized, 18-20 cm, stocky parrots, with colourful plumage. Their most prominent features are the extremely short, rounded tail, the elongated ear-coverts and proportionally large bill with a prominent notch in the upper mandible. Fig Parrots are distributed throughout different regions of New Guinea, where they can be found primarily in fruit-bearing trees, especially fig trees.

The Edward’s Fig Parrot averages 7 inches (~ 18 cm) in length. The most distinguishing features of the male fig parrots are the broad blue-black band on the upper breast, the red belly and lower breast and the broad black line through the eyes to the hind crown and nape. It has a green forehead. The lores (the regions between the eyes and bill on the side of a bird’s head) and crown are yellowish-green cheeks. The side of the head is yellow. It has greenish blue patches under the eyes. There is a narrow violet-pale blue band on the breast progressing to the red band.

Listen to the sound of Edwardss Fig Parrot

Australasia : North New Guinea. The Edwards’s Fig Parrot is restricted to northeastern New Guinea, where it is found from Yos Sudarso Bay and Vanimo east to the Huon Gulf

Found up to 800m (2624 ft) in humid lowland forest, partially cleared areas, forest edge as well as near human settlements . Are usually found in pairs or noisy groups. Flocks of up to 400 birds have been recorded in the tops of fruiting trees. Birds are quick moving, hanging upside down to reach food.

Nesting takes place in small hollows high up in large trees, although little is known about this aspect of their behaviour. Clutch size is 2 eggs.