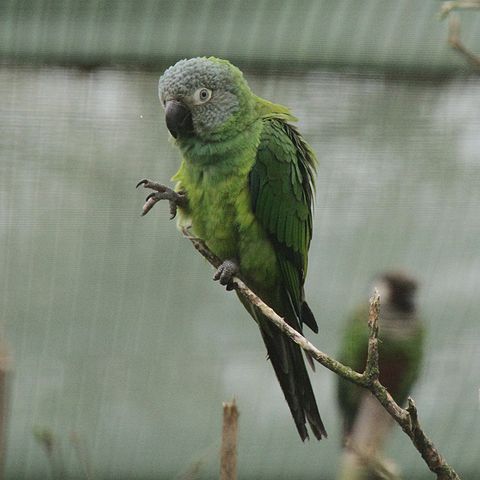 Listen to the sound of Dusky-headed Parakeet

The pair raises their offspring together, nesting in woodpecker holes in trees or arboreal termite nests. They lay three to four eggs which are incubated for 24 days. Once hatched the young will stay in the nest for about 55 days

in pairs or groups of 3 to 8 birds outside breeding season, occasionally flocks of 75 to 100 birds when sufficient food available; nomadic; prefers river bank areas; roosting trees also here; seldom flies over thick forest; inconspicuous; very quiet when feeding; mostly makes sound only during flight; call similar to White-eyed Conure (Aratinga leucophthalmus), but more refined and sharper. Diet consists of seeds, fruits, flowers and berries; seeks out decaying trees probably for insects and their larvae; regularly visits areas in forest and on river banks where soil containing minerals to be found.

It sometimes forms large flocks, which may perform local movements in response to changes in food supplies.