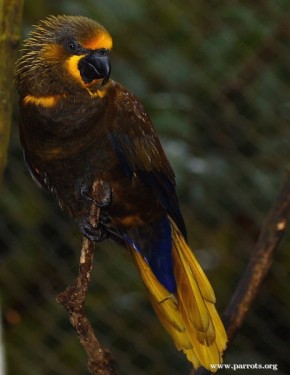 Chalcopsitta is a genus of parrot in the family Psittacidae and the subfamily Loriinae. All four species are found on the islands of and around New Guinea and the Solomon Islands. The four species of the Chalcopsitta genus are about 31 – 32 cm (12 inches) long. They have long tails, and prominent bare skin at the base of the lower mandible.

Listen to the sound of Brown Lory

Australasia : North New Guinea. This species has a patchy distribution along the northern coastal lowlands of New Guinea, from the Geelvink Bay in Irian Jaya (Indonesia) to the Astrolobe Bay in Papua New Guinea.

Only data from capitvity, clutch size 2 eggs incubated for about 2-4 weeks. Young fledge after about 11 weeks.

Nectar from flowering trees, and fruit.