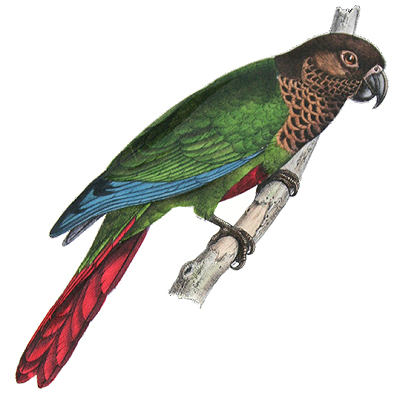 South America : West Amazonia. The Bonaparte’s Parakeet occurs in western Amazonian Brazil, along the south bank of the Amazon and in the drainage of the Rio Purus.

Found up to 800m (2624 ft) in terra firme and varzea forests, including forest margins and nearby clearings with tall trees. The Bonaparte’s Parakeet is widespread and fairly common in lowland evergreen forest, but the biology of this species is very poorly known.

The nest is most likely placed in a tree cavity, clutch size estaimated at 5-7 eggs.

It is social and typically seen in pairs or groups. It feeds on fruits, seeds and flowers.

Probably resident. They are social parrots that are typically seen in pairs during the breeding season or groups of 5 to 12 birds when they are not in breeding mode. Occasionally larger flocks can be seen at favored feeding sites or clay banks.