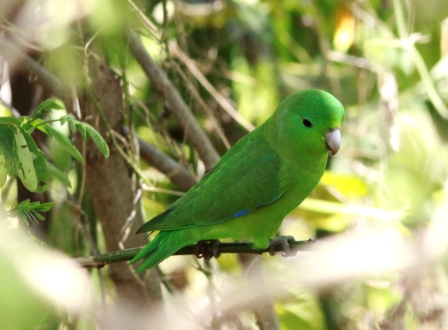 The genus Forpus consists of seven recognized species that are distributed in the lowlands of South America and Mexico. The Forpus genus is one of the few groups of parrots where females differ markedly from males. They are the smallest birds in the Psittaformes order.

Listen to the sound of Blue-winged Parrotlet

Nest is tree hole or termite nest or sometimes in uesed nest of Hornero’s. Grass is used to provide for floor bedding of the nest. The clutch size is 4-7 eggs which are incubated for about 18 days by the female only. Young leave the nest after about a month.

Eats fruits of cecropia, seeds of Mikania and Trema mirantha and flowers of Ambrosia and Marcgravia. Will forage in the open and sometimes on the ground. Highly social; found in groups of up to 50 individuals.

Blue-winged Parrotlets in Argentina move seasonally as different plant communities flower, while populations in the Atlantic Forest of Brazil are altitudinal migrants.