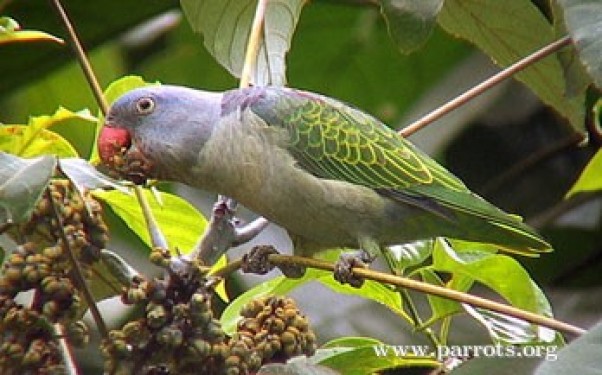 The Blue-rumped Parrot, Psittinus cyanurus, is a parrot found in the very southern tip of Myanmar, peninsular Thailand, Malaysia, Borneo, Sumatra and nearby islands. It is a small parrot (18 cm) and is primarily green. It is the only member of the genus Psittinus.

Listen to the sound of Blue-rumped Parrot

It inhabits primary, dry-land evergreen and semi-evergreen lowland forest, both mature and selectively logged, and also visits edge vegetation, cultivated areas and gap-phase growth of forest clearings and occasionally mangroves, up to 1,300 m though generally below 700 m. It is gregarious and regularly forms flocks of up to 20 individuals.

Nests in tree holes up around 30 meters it live forest trees. Clutch size 3 eggs. occurs in February to May in Malaysia, and June to September in Borneo.

Gregarious birds found in groups of up to 20 individuals. Birds forage quietly in the canopy or fly swiftly above the forest, wheeling around the tree tops calling frequently. Feeds on seeds, fruits and blossoms.

This forest associated species is listed as Near Threatened because it is assumed to have experienced moderately rapid declines owing to the extensive loss of lowland forests from large areas of the Sundaic lowlands, and it may be impacted by trade. It is not considered more threatened because it can use secondary habitats and also occurs in (less threatened) lower montane forest.
Rates of forest loss in the Sundaic lowlands have been extremely rapid and these impacts are compounded by hunting and trapping. However, the species’s ability to utilise secondary habitats suggests it has avoided more rapid declines, thus a moderately rapid population decline is suspected. Forest destruction in the Sundaic lowlands of Indonesia and Malaysia has been extensive (Kalimantan lost nearly 25% of its evergreen forest during 1985-1997, and Sumatra lost almost 30% of its 1985 cover), because of a variety of factors, including the escalation of logging and land conversion, with deliberate targeting of all remaining stands of valuable timber including those inside protected areas, plus forest fires (particularly in 1997-1998), and declines are compounded by trapping for the cage-bird industry. However, the species’s use of secondary growth and higher elevations implies that it is not immediately threatened.

Probably long-distance nomadic dispersal. Birds have large home ranges or are in seek of seeding plants.