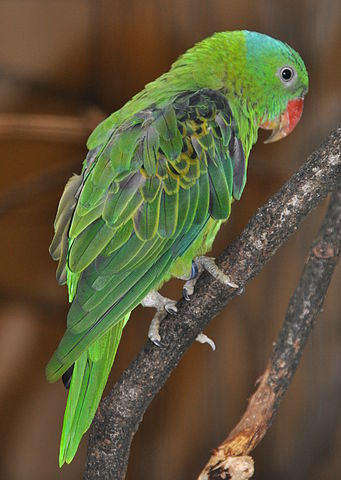 Listen to the sound of Blue-naped Parrot

Oriental Region : Philippines. Tanygnathus lucionensis is confined to the Philippines, where there are records from at least 45 islands, plus the Talaud Islands, Indonesia, and islands off north-east Borneo belonging to Malaysia.

It is a bird of closed and open forest formations, including second growth, coconut plantations, banana patches and mangrove, chiefly in lowland and coastal areas, up to 1,000 m. It is usually found in flocks of up to 12 individuals which roost communally and make regular dawn and dusk flights between feeding and roosting areas.

Nests in tree cavities natural or old woodpecker nests, often found in a clearing. Clutch size is 2-3 eggs in captivity.

It feeds in fruiting trees on nuts, fruits, berries and also on grain in other habitats. Nesting takes place in a hole in a tree in April-Juneq

This species is listed as Near Threatened because there are some indications that it has a moderately small, fragmented population, and it may be undergoing a continuing decline owing to trapping and forest loss. However, little is currently known about the population size and structure of, and threats to, this species. Further information is needed to improve the accuracy of this assessment.
It has declined through trapping (for both domestic and international trade) and habitat loss owing to agricultural expansion and logging pressure. It was common on most islands in the Philippines a century or less ago, but has suffered declines since on such a scale that it is now rare or extinct on many islands. However, while not a small-island specialist it does survive in small pockets of habitat on the smaller islands, so that its status overall is difficult to assess. Moreover, it is still fairly numerous in some areas of Palawan and on Tawitawi, and high numbers persist in a large tract of forest on Talaud. The total population was provisionally estimated to be below 10,000 individuals in 1993

Resident on small islands, some movements my occur on larger landbodies.