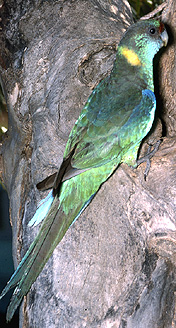 The Australian Ringneck (Barnardius zonarius) is a parrot native to Australia. Except for extreme tropical and highland areas, the species has adapted to all conditions. Traditionally, two species were recognised in the genus Barnardius, the Port Lincoln Parrot (Barnardius zonarius) and the Mallee Ringneck (Barnardius barnardi), but the two species readily interbred at the contact zone and are now considered one species. Currently, four subspecies are recognised, each with a distinct range. The classification of this species is still debated, and recent molecular research has found that all subspecies are very closely related.

The Australian Ringneck is a large parrot, differing in size and plumage in different regions. There are four subspecies, in two main groups. All are mostly green, with an obvious yellow band on the hind-neck. Members of the Mallee group have a mainly green head and neck. The Mallee Ringneck, subspecies barnardi, has a more varied green and blue body, with more yellow underneath and a red frontal band. The Cloncurry subspecies macgillivrayi has much more yellow and pale turquoise around the face. The Port Lincoln group all have dark hoods and are mainly green. The Twenty Eight Parrot, subspecies semitorquatus, has a red frontal band and is all green underneath. The Port Lincoln Parrot, subspecies zonarius, is green and yellow underneath. All subspecies hybridise widely. They are quiet when feeding, but when disturbed fly off with loud alarm calls. Their flight is swift and undulating. This species is also known as the Mallee, Port Lincoln, Banded or Cloncurry Ringneck, Twenty Eight Parrot or Buln Buln.

Listen to the sound of Australian Ringneck

Australasia : West, Central Australia. The Australian Ringneck is endemic to (only found in) Australia. The Mallee group is found in arid eastern Northern Territory, north-western Queensland and inland eastern Australia. The Port Lincoln group is in central and western arid Australia. Ringnecks are generally absent from coastal areas in the eastern states though aviary escapes may be found around Sydney and the Central Coast of New South Wales and the Tablelands.

Australian Ringnecks lay their 4-7 eggs in hollows in living or dead trees on a bare base or on rotting wood dust. They enter through a hole in the trunk, a knothole or a spout. The female incubates the eggs for about 19 dys while being fed by the male and she may leave the nest for a short time to be fed by him. The young are fed by both parents and often can be seen at the mouth of the hollow, they fledge after other 5 weeks.

Australian Ringnecks feed mainly on the ground, but also in trees and shrubs, usually in the morning and late afternoon, resting in the heat of the day. They eat seeds, and some fruits, flowers, nectar and insects and their larvae. They often feed on spilt grain on roadsides

They are mainly resident or sedentary, but may move in arid areas in response to rainfall.