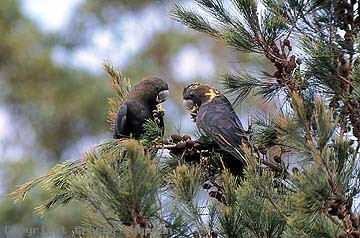 Glossy Black-cockatoos require large tree hollows in both living and dead trees for nesting and must compete with other hollow-dependent mammals and birds for a suitable nesting hollow. The female lays a single egg which is incubated for about a month by the female only. The young fledge after 2-3 months.

This species has a very large range, and hence does not approach the thresholds for Vulnerable under the range size criterion (Extent of Occurrence <20,000 km2 combined with a declining or fluctuating range size, habitat extent/quality, or population size and a small number of locations or severe fragmentation). Despite the fact that the population trend appears to be decreasing, the decline is not believed to be sufficiently rapid to approach the thresholds for Vulnerable under the population trend criterion (>30% decline over ten years or three generations). The population size may be moderately small to large, but it is not believed to approach the thresholds for Vulnerable under the population size criterion (<10,000 mature individuals with a continuing decline estimated to be >10% in ten years or three generations, or with a specified population structure). For these reasons the species is evaluated as Least Concern.
Most habitat clearance occurred in the 19th century, although, on the mainland, the species remains threatened by clearance of habitat for agriculture and residential development, degradation of habitat by burning, and the suppression of vegetation regeneration by grazing stock and rabbits. Fragmentation of habitat, especially when associated with agriculture, leads to the penetration of other native species from more open habitats which then compete for hollows. Illegal trapping for the bird trade may be a localised problem. However, in some parts of its range the area of mature food trees may be increasing. The population is suspected to be declining overall as the largest subpopulation, lathami, is declining slowly throughout its range. However sub species erebus is thought to be increasing and subspecies halmaturinus is increasing as a result of conservation efforts on Kangaroo island.

Resident, but may move locally after breeding. Small groups following fruting trees in a defined locality, usually in small groups.