Source to all birds on the Planet
admin
Indian Ocean, Procellariidae, Procellariiformes
Comments 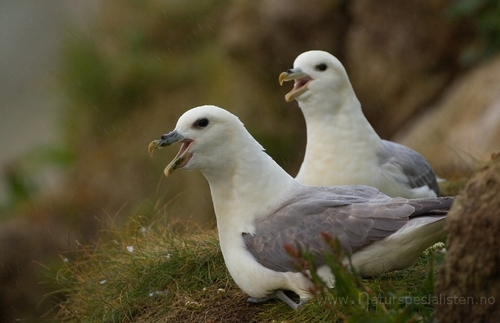 Fulmars are a distinct but diverse group of petrels that evolved from an early split from the ancient tubenose lineage, around 15 My ago. Some calculated a much earlier evolution of the fulmars, more than 26 My ago or placed the origin of the fulmarines in late Oligocene > 23 My ago.
Most species of this group occur in the Southern Hemisphere. Fulmarus glacialis is the only northern representative. Although there is a great difference in size, bill shape, colouring and behaviour, the members of this group show strong similarities in their skeletal structure. The differences are very much related to the environment they occupy and their respective foraging strategies. The enourmous hooked bill of the Giant Petrel (Macronectes) is the perfect tool for this ‘vulture of the southern seas’. The small bill of the Snow Petrel (Pagodroma) and the relative broad bill of the Cape Pigeon (Daption) are each good examples of the variety of feeding strategies on the other end of the spectrum. The ‘true’ Fulmars (Fulmarus) and the Antarctic Petrel (Thalassoica) take a position somewhere in between.

The Northern Fulmar is similar in appearance to a gull but stockier, with a thick neck, and more rounded wings and tail. The Northern Fulmar varies in color from mostly white, to gray and white like many gulls, to an overall gray-brown, with every possible shade in between.
Although the Northern Fulmar appears gull-like at first glance, its flight behavior is quite different. Stiff-winged glides and quick wing-beats are characteristic of its flight. When feeding on the surface of the water, the Northern Fulmar grabs prey at or just below the water’s surface. It also dives into the water and propels itself using its feet and wings

Listen to the sound of Fulmar

Indian Ocean : widespread. The Northern Fulmar is found breeding throughout the north Atlantic and north Pacific, ranging from Japan and the United Kingdom in the south, to the high Arctic in the north. Northern populations are migratory, travelling south as the sea freezes over. Southern populations are more dispersive, but do not usually reach zones of warm water. Young birds may make transoceanic crossing and general wander further than the less mobile adults.

Found in the cold waters of the open ocean, Northern Fulmars breed on steep sea cliffs on islands or mainland promontories. They use cliffs farther north than do most high-Arctic seabird species, often crossing ice-covered water to get to their breeding sites.

Colonial breeders that nest on open sea cliffs, Northern Fulmars breed mainly in high-Arctic Canada and on islands in the Bering Sea. These birds are slow to mature and do not start breeding until they are 8-10 years old. Unlike many of the other members of this family, they are active around their nesting colonies during the day. The nest is located on the ledge of a cliff or in a hollow on a bank or slope. When nesting on a rock ledge, the fulmars do not build a nest, but when they nest on a bank or slope, they make a shallow scrape, occasionally lined with small stones. The female lays one egg, and both parents incubate for about 7 weeks. Once the egg hatches, both parents feed the chick by regurgitation. The chick takes flight for the first time at the age of about seven weeks.

The diet of the Northern Fulmar is varied, consisting of crustaceans, fish, small squid, and jellyfish. Fulmars commonly follow fishing boats and feed off the fish waste thrown from the boats.

This species has an extremely large range, and hence does not approach the thresholds for Vulnerable under the range size criterion (Extent of Occurrence <20,000 km2 combined with a declining or fluctuating range size, habitat extent/quality, or population size and a small number of locations or severe fragmentation). The population trend appears to be increasing, and hence the species does not approach the thresholds for Vulnerable under the population trend criterion (>30% decline over ten years or three generations). The population size is extremely large, and hence does not approach the thresholds for Vulnerable under the population size criterion (<10,000 mature individuals with a continuing decline estimated to be >10% in ten years or three generations, or with a specified population structure). For these reasons the species is evaluated as Least Concern.
Fulmarus glacialis is a widespread breeder in coastal areas of north-west Europe, which accounts for less than half of its global breeding range. Its European breeding population is very large (>2,800,000 pairs), and underwent a large increase between 1970-1990. Although the species declined slightly in the United Kingdom during 1990-2000, other European populations-including key ones in Iceland, Svalbard and the Faroes-increased or were stable, and the species underwent a large increase overall.
Populations in the Atlantic Ocean have experienced dramatic increases in recent decades. In the Pacific, several new colonies have been established since 1970, although there is no indication of dramatic increases in the Pacific comparable to those in the Atlantic. The commercial fishing industry is a major factor in the population of Northern Fulmars, providing them with most of their food. Large aggregations of birds can be found behind fishing boats, feeding on offal. While Northern Fulmars are not currently threatened, as colony nesters with high density in a few small areas, they are at potential risk if that habitat is degraded. 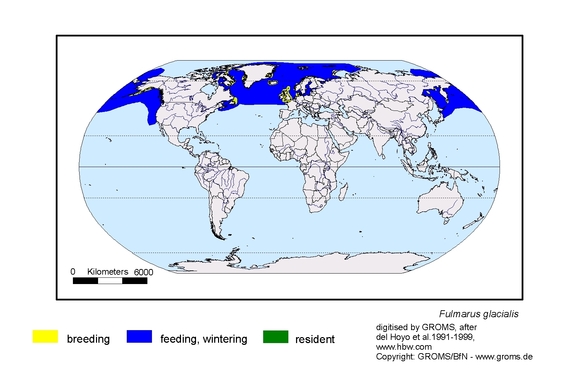