Source to all birds on the Planet
admin
extinct, Pelecaniformes, Phalacrocoracidae
Comments 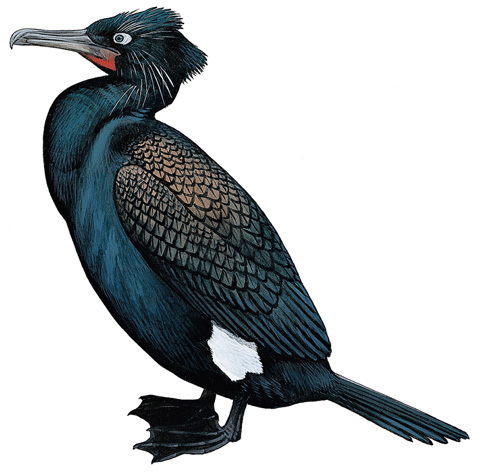 One member of this order, the Spectacled Cormorant, can confidently be listed as extinct, but there is one other rather mysterious form that may be. This is a bird known as Kenyon’s Shag (Phalacrocorax kenyoni). It is identified from just three specimens from Amchitka Island, in the Aleutian Archipelago of the north Pacific, collected during the late 1950’s and preserved as skeletons.

The external appearance of this bird is unknown. So too is its relationship to other cormorants, and it has even been suggested that these may merely have been outsize individuals of the extant Red-faced Cormorant (Phalacrocorax urile), a species that is still common in this same area. It is not even known if the form kenyoni still survives, so this is truly a mystery bird.

The spectacular Spectacled Cormorant is a particularly striking member of the list of extinct birds. Discovered on Bering Island during 1741 by the celebrated naturalist George Wilhelm Steller, the species was exterminated in little more than a century. At the time of its discovery this large cormorant was common, although its range was very limited. In addition to Bering Island, it was also found on the nearby Commander Islands, and it probably lived on other islands of the Aleutian Archipelago in the north Pacific. Its general unwariness, its suitability for the pot and its small wings that rendered it almost flightless, combined to make this bird an obvious target for man. There are very few specimens in existence and nothing of significance is known of the bird in life.