Source to all birds on the Planet
admin
extinct, Passeriformes, ZOSTEROPIDAE
Comments 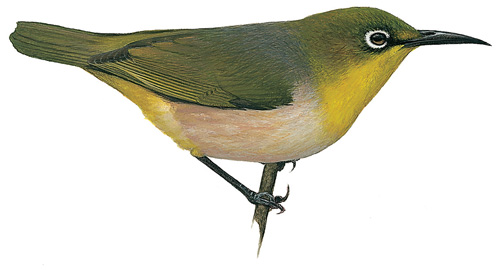 So impressed was he by the comparatively large size of this species, for a white-eye, that the famous nineteenth century ornithologist and writer John Gould felt inclined to give this bird the common name of “Robust Zosterops”, and this same sensation is perhaps recalled somewhat in the scientific name that he gave it. Gould had developed a considerable interest in the avifauna of Australia and published his celebrated book The Birds of Australia between the years 1840 and 1848. It was later, while he was undertaking research for a Supplement to this work, that he became aware of this particular species.

The species was endemic to the island of Lord Howe, a tiny piece of land, 11 km long by 1?6 km wide, that lies far out in the Tasman Sea between Australia and New Zealand. During the mid-nineteenth century, when the bird was first identified, it was found to be common, and the population stayed healthy for the next 60 years or so. Then in 1918, an incident occurred that proved fatal for many of the birds of Lord Howe. A ship, the SS Makambo, was accidentally grounded at a site known as Ned’s Beach. Black rats (Rattus rattus) left the stricken vessel and poured ashore – and the consequences were disasterous. In a very short space of time the white-eyes were gone. A search made just ten years later could find no trace of them.

There are a few records concerning the habits of the species. When it was common it was regarded as something of a pest. It was destructive to fruit and crops, and was even said to suck the eggs of other bird species! Its own eggs were laid during November and December. They were blue and, typically, the clutch consisted of two or three. The nest was cup-shaped and made from rootlets and grasses with a soft lining of disintegrated leaves and other suitable materials.

Curiously, another kind of white-eye lived on tiny Lord Howe. This was a race of the widespread Silvereye (Zosterops lateralis), and to distinguish the larger birds belonging to the species Z. strenuus local people gave them the name “big grinnels”.