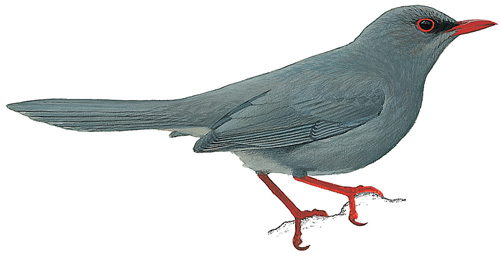 The Grand Cayman Thrush became extinct towards the middle of the twentieth century, but considering the comparative lateness of this date very little is known of it. One of the few things on record is a description of its song, which was apparently rather weak and hesitant, more, perhaps, a subdued warbling than a melodic triumph. As the name indicates, the species came only from the island of Grand Cayman, in the West Indies, where it inhabited dense woodland. It was closely related to a widespread West Indian species, the Red-legged Thrush (Turdus plumbeus).

The Grand Cayman birds were large and beautiful grey thrushes that first came to public attention during 1886, when C. B. Cory described the species. He found it to be common on the island, but its decline was to be rapid. By the outbreak of World War I, it was rare and could only be found in remote areas of woodland. No specimens were taken after this time and the last recorded sighting occurred before the start of World War II. Destruction of habitat was probably a key factor in ther/extinct/PASSEpearance, as it E/Grand Cayman Thrush.jpg” alt=”Grand Cayman Thrush” title=”Grand Cayman Thrush” class=”aligncenter size-full”/>