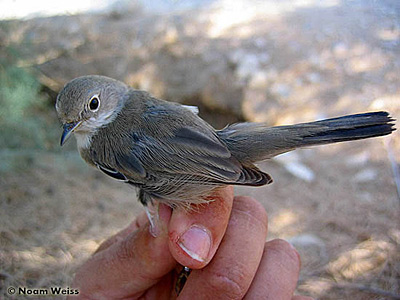 Rather small to medium-sized warbler, with quite heavy bill, usually flat crown, and quite long tail. Plumage suggests Sardinian Warbler and several other small Sylvia.
Male dull black on head, dark grey-brown above, pink-white to brown-pink below, usually dardest from throat to fore-belly. Female grey to sandy-brown above, rusty on forehead and brghtest on fringes of inner wing-feathers, brown to buff-white below. Bright yellow to red-brown eye set in pinkish to yellow or brown bare ring. Constantly waves tail.
Sexes dissimilar, little seasonal variation.

Breeds in lower middle latitudes in arid continental climates, in scrub along river banks and on wooded lower slopes of mountains, also in orchards, nurseries, and along shelterbelt forest strips combined with irrigation.

Nest, deep cup, often thin-walled, of twigs, plant stems, grass leaves, and stems, with some rootlets, plant fibres, down, and spiders’ webs, lined with finer grasses and rootlets, plus small feathers and hair.
4-5 eggs, sub-elliptical, smooth and glossy, white or faintly tinged green, profusely speckled, spotted, and blotched all over with brown, olive-brown, and grey. Incubation 11-13 days, both sexes but more by female.

Adult and larval insects, with some fruit in autumn. Feeds mainly under cover, hopping about inside canopy of low trees and bushes.

This species has an extremely large range, and hence does not approach the thresholds for Vulnerable under the range size criterion (Extent of Occurrence <20,000 km2 combined with a declining or fluctuating range size, habitat extent/quality, or population size and a small number of locations or severe fragmentation). The population trend appears to be stable, and hence the species does not approach the thresholds for Vulnerable under the population trend criterion (>30% decline over ten years or three generations). The population size has not been quantified, but it is not believed to approach the thresholds for Vulnerable under the population size criterion (<10,000 mature individuals with a continuing decline estimated to be >10% in ten years or three generations, or with a specified population structure). For these reasons the species is evaluated as Least Concern.
Sylvia mystacea has a predominantly Middle Eastern breeding distribution, which
extends into south-eastern Europe in southern Russia, the Caucasus and parts of
Turkey. Its European breeding population is relatively small (<150,000 pairs), but was probably stable between 1970-1990. Although there were declines in Turkey during 1990-2000 (trends were not available for Armenia and Georgia), the sizeable population in Russia increased, and the species probably remained stable overall. Consequently, it is provisionally evaluated as Secure.

All populations migratory, moving south or south-west to winter in north-east Africa, Arabia and southern Iran. Entry into Africa apparently via Arabia.