Source to all birds on the Planet
admin
Passeriformes, Sylviidae
Comments 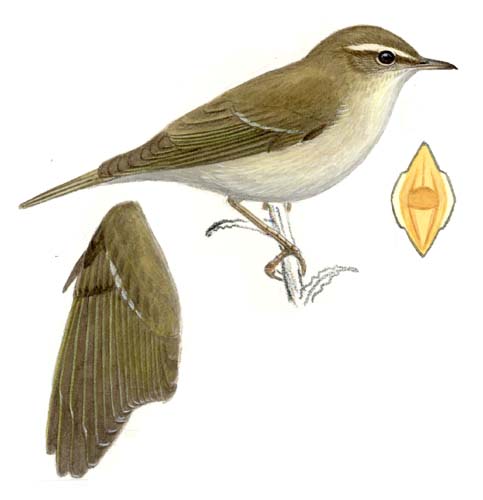 Phylloscopus borealis is a widespread summer visitor to the boreal zone of
Fennoscandia and Russia, with Europe accounting for less than a quarter of its global
breeding range. Its European breeding population is very large (>4,500,000 pairs),
and was stable between 1970-1990. No trend data were available for the stronghold
population in Russia during 1990-2000, but the small populations in Norway, Sweden
and Finland were all stable.

Listen to the sound of Arctic Warbler

Might more accurately be named Subarctic Warbler, since breeding range falls entirely within that region, and as a tree-dweller is precluded from living beyond July isotherm of 10Â°C, beyond which tree growth is inhibited. Remarkable also for combining successful occupancy of so much of Holarctic taiga zone with absence from forests south of boreal climates except in east Asian mountain regions. Despite inhabiting largely coniferous forests, shows marked preference for birch, poplar, willow, and other broad-leaved trees or scrub wherever available, especially along river banks and near water, but in places also frequents dry, sparsely wooded slopes and even rhododendron thickets.

Arctic Warblers most commonly (almost solely) feed on insects.Arctic Warblers obtain most of their food by gleaning dwarf birch or willow shrubs. Hawking from
the shrub layer is not uncommon. Occasionally, these forays reaches heights of 10 m with the birds turning a somersault at the peak of flight after capturing a moth or Dipterid. This impressive display may be a territorial or breeding behavior, although such behavior is observed well into
the nestling period when there is relatively little singing, chasing, or other evident mating behaviors. Arctic Warblers are also observed to feed while hovering, particularly near the crowns of spruce.

In Northern Russia laying begins late June, in Northern Sweden first eggs are laid in last week of June or first week of July. Nest is built on ground in vegetation, or in natural crevice in mossy bank or among tree roots, often well concealed. Nest is a domed structure with side entrance, of dry thin grass stems and leaves, often with moss and dry leaves, lined with finer grasses, but only rarely with feathers or hair. Clutch size is 5-7 eggs which are incubated for 11-13 days. Young fledge 13-14 days after hatching.

This species has a large range, with an estimated global Extent of Occurrence of 10,000,000 kmÂ². It has a large global population estimated to be 27,000,000 individuals (Rich et al. 2003). Global population trends have not been quantified, but the species is not believed to approach the thresholds for the population decline criterion of the IUCN Red List (i.e. declining more than 30% in ten years or three generations). For these reasons, the species is evaluated as Least Concern. (source Birdlife.org)