Source to all birds on the Planet
admin
Eurasia, Passeriformes, Remizidae
Comments 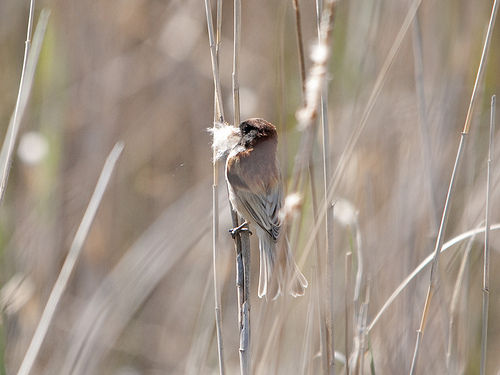 Adult male of Black-headed Penduline Tit in spring has black head and neck. Chestnut-brown color of mantle is fluently paled in uppertail which is sandy; throat and craw are black; other underparts are buff-sandy with paler undertail. Shoulders, lesser and median upperwing coverts are chestnut; greater coverts are dark-brown with buffy edges. Flight and tail feathers are brown with pale-buff edges. Bill, tarsus and claws are black-brown. Adult female is similar on male but is distinguished by dim tones. In fresh autumn plumage pale-buff and white edges of feathers are heavy developed. Lore and ear coverts are black, fore-head is brown, mantle is dark-sandy, underparts are buff-white with some number of brownish feathers on breast. Juveniles in first plumage is similar on juveniles of Eurasian Penduline Tit but is distinguished by dark grayish crown and by dark strip on forehead and head-flanks.

It inhabits reed, mace and cane thickets on shallow water. On dispersal it visits thickets of some shrubs; and small reed-thickets with singly willows far from water.

It breeds in separate pairs. Nest is built between several reed stems at 0.4-1.6 m above water. Nest is from long reed stripes and vegetation fluff (willow, reed and rush), which is used not only to inside lining, but in construction of nest walls too. Breeding on bushes and trees is unknown. During two weeks or more nest is constructed mainly by male with some help of female which brings fluff. Clutches of 5-7 eggs founded from early May to early July. Both parents feed juveniles. Fledged young birds are observed from July to August. Probably two broods per season.

Mainly larval insects, with spiders of considerable importance near beds of reed. Feeds mainly in trees, bushes, and reedbeds, sometimes in herb layer. Searches for food in outermost twigs and branches of trees, but also sometimes in bark crevices on trunk and bigger branches.
In spring, birds regularly visit flowers of willow to feed on insects.