Source to all birds on the Planet
admin
Eurasia, Passeriformes, Regulidae
Comments 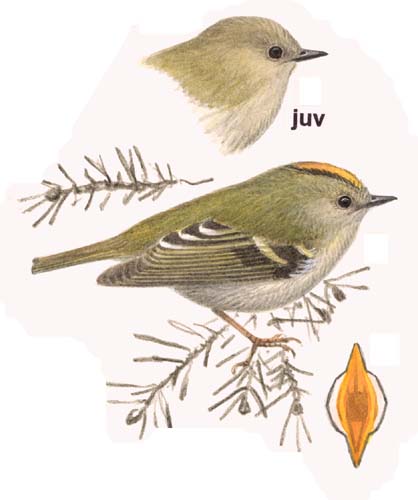 Goldcrest is one of the smallest birds in Europe. Upperparts are olive green. Rounded and very broad wings show two white wing bars and dark flight feathers. Underparts are buff white. It has pale face with orange crown in male, and yellow crest in female. Orange and yellow are bordered with black in both sexes. These feathers form a short crest when erected. Eyes are dark, rounded by white short feathers. Thin, pointed bill is black. Legs and feet are pale brown. Goldcrest has strong toes to grasp the branches in upside down posture. Juvenile is similar to adult, but it lacks the head markings until the first autumn.
Goldcrest is a tiny and hyperactive bird. It is always fluttering and flitting through outer canopy, always moving to lower perches, changing trees and bushes, with wings and tail flicking. When hidden in dark conifers, it gives away its presence with its high-pitched call.
It forages into foliage and probes into bark crevices with its pointed bill. It often hangs upside down or flitters to catch insects on the underside of leaves.
Goldcrests are often seen in small groups.
Northern birds move to south in winter, and may travel about 1000 km in a week. During winter, Goldcrests have an erratic behaviour, joining groups of sedentary birds of the same species. They fly long distances, but bad weather can stop their migration. They are vulnerable during hard winters, and their numbers may decline of 75 to 80 %. But populations increase if winters are temperate. During hard winters, these birds feed all day round, and roost together at night in dense vegetation, very close to each other.
Courtship displays start in late April or early May. Sedentary males sing to establish territories and attract females. Male displays its bright orange crest in front of its mate. Breeding pairs are very active and to build the nest takes from a few days to three weeks.
Higher conifers include several breeding pairs at each level of the trees. Several territories can occur in the same tree.

Listen to the sound of Goldcrest

Goldcrest breeds in conifer and mixed woodlands, in large gardens and parks with conifers. Outside breeding season, it also lives in scrub and in deciduous trees.

Goldcrest’s nest is hammock-shaped, built by both male and female, but mainly by male. This nest is built on outer branches in conifer. This action may last almost three weeks. Nest includes three distinct parts. Outerpart is made with mosses and lichens, woven with spider webs, and well caught to the branches. Median part of the nest is made with mosses, and inner part is lined with hair and feathers. Nest is almost spherical with a narrow entrance close to the top. It is located relatively high in trees, up to 15 meters.
Female lays 9 to 12 smooth and pale eggs with a few markings, one egg per day. Incubation lasts about 16 days, and starts before all eggs are laid. Female incubates, broods and cares the young for the first seven days. Male feeds female at nest and both adults feeds the young which fledge at about 17 to 22 days.
Parents start to prepare the next clutch while they are still feeding the first. Female may lay its second brood, even with the first still at nest.
This species may produce two broods, about 20 young at least per year. They breed when food resources are abundant and days long enough.

Goldcrest feeds on small insects and spiders found in trees. During winter, it feeds on seeds and insects on the ground. Young grow quickly with a rich diet including insect larvae and small spiders.