Source to all birds on the Planet
admin
North America, Passeriformes, Polioptilidae
Comments 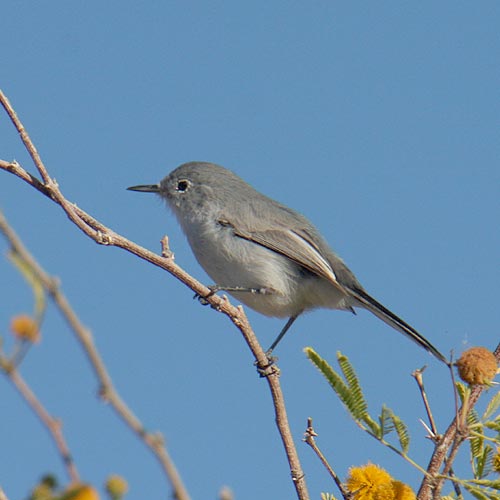 Suggests a miniature Mockingbird. A tiny, slim mite, smaller than a chickadee; blue-gray above, whitish below, with a narrow white eye-ring. The long, black and white tail
is often cocked like a wren’s tail and flipped about.

Listen to the sound of Blue-grey Gnatcatcher

Male arrives first in breeding areas and sings to defend territory and attract a mate. Courtship involves male leading female to several potential nest sites.
Nest: Site is in tree, often deciduous. Nest saddled on horizontal limb of tree, sometimes in fork; height above ground quite variable, 2-80′ up, but 20-
40′ may be typical. Nest (built by both sexes) is compact open cup of grass, weeds, plant fibers, strips of
bark, lined with plant down, animal hair, feathers. Outside of nest coated with spider webs and decorated with pieces of lichen, making nest well camouflaged.
Eggs: 4-5, sometimes 3-6. Bluish white, dotted with reddish brown. Incubation is by both parents, 11-15 days, usually 13.
Young: Female broods young much of time at first, while male brings food; later, both bring food for nestlings. Young leave nest about 10-15 days after hatching. 1-2 broods per year.

Mostly insects. Feeds on a wide variety of small insects, including leafhoppers, treehoppers, plant bugs, leaf beet
les, caterpillars, flies, small wasps, and many others. Also eats many spiders.
Behavior:
Forages actively in trees and shrubs. Searches for insects among leafy outer twigs of deciduous trees and on branches and trunk in pines. Takes most food while perched, also hovers to pick items from surface, and often flies out to catch insects that it
flushes from foliage. Large insects are beaten against a branch before being eaten.