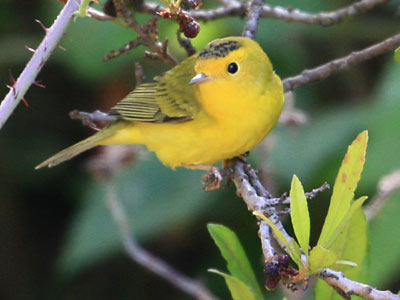 Listen to the sound of Wilsons Warbler

Breeds almost throughout Nearctic climatic zones, from Arctic tundra and montane valleys and slopes in Alaska, and up to nearly 500 m in southern California. Favours moist open shrubbery, including willow and dwarf birch, especially by streams, ponds, and bogs. On migration, more tolerant of drier situations.

Wilson’s Warblers are primarily monogamous, although some are polygynous, and high rates of extra-pair copulations have been observed. Pacific Lowland populations lay fewer eggs, raise fewer young, and have higher rates of monogamy than populations in the mountains. Lowland populations nest in shrubs, unlike their ground-nesting highland relatives. The female selects the nest site, either sunken in a patch of moss or sedge, or in a low shrub or vine. She builds a bulky open cup of leaves, grass, and moss, lined with grass and hair. The female incubates 2 to 7 eggs for 11 to 13 days, and broods the young for the first few days after they hatch. Both parents feed the young, which leave the nest 9 to 11 days after hatching. The parents continue to feed the young for up to 25 days after they fledge.

Migratory, moving at least 800 km (most birds over 2500 km) between summer and winter ranges. Winter range (Mexico and southern Texas south to Panama) very limited in comparison with breeding range; highest numbers in Mexico. Migration on broad front in both seasons, mainly west of Appalachians, with most birds skirting Gulf of Mexico to west rather than overflying it; uncommon to rare in south-east states and West Indies. A few vagrant records July-September in Arctic Canada and Alaska, on islands in Bering Sea, and in Greenland.