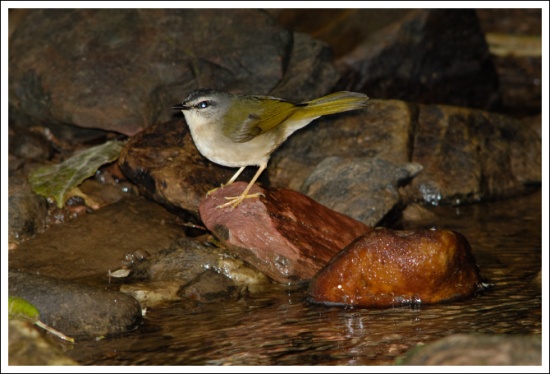 It is brownish-olive above with a grey crown, buff supercilium and lower cheek either side of a dark stripe through the eye. Underparts are whitish with buffy flanks

It is found in Argentina, Bolivia, Brazil, French Guiana, Guyana, Paraguay, Suriname, and Venezuela. It has 3 disjunct ranges: in south east Brazil; in Bolivia; and from south Venezuela to the state of MaranhÃ£o in north-east Brazil.

Its natural habitat is subtropical or tropical moist lowland forests. The Neotropical River Warbler is found along rivers and streams in forests where it forages on or close to the ground hopping rather than walking.

Probably builds a domed nest, like other species in the genus, no further data.

Searches very actively for insects in dense undrstorey or runs along logs or the ground chasing food.

This species has a large range, with an estimated global Extent of Occurrence of 4,000,000 kmÂ². The global population size has not been quantified, but it is believed to be large as the species is described as ‘frequent’ in at least parts of its range (Stotz et al. 1996). Global population trends have not been quantified, but the species is not believed to approach the thresholds for the population decline criterion of the IUCN Red List (i.e. declining more than 30% in ten years or three generations). For these reasons, the species is evaluated as Least Concern.