Source to all birds on the Planet
admin
North America, Paridae, Passeriformes
Comments 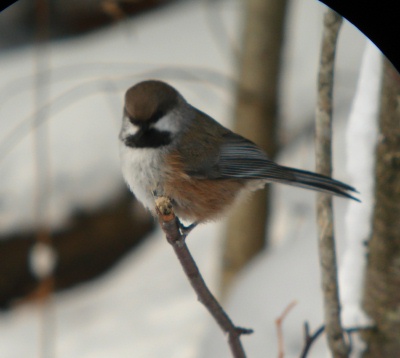 The small size, black bib, whitish cheeks, and tiny bill mark it as a chickadee; the dull brown cap, rich brown flanks, and restricted white on its dusky cheeks
as this species. The general color is brown rather than gray.

Listen to the sound of Boreal Chickadee

Conifer forests.
Mainly in forests of conifers, especially spruces, but also in some mixed forest. Occurs in low stunted spruces as far north as treeline. At southern edge of range, found in spruce bogs in East, high mountain forest in West, barely south of Canadia
n border in either region.

May mate for life, the birds remaining together all year.
Nest: Site is in hole in tree, either natural cavity or old woodpecker hole; chickadees may also excavate their own site or enlarge an existing hole. Site is usually low, 1-
12′ above the ground. Both sexes help with excavation, but only female builds nest inside. Nest has foundation of moss, bark strips, lichens, feathers, lining of animal hair and plant down.
Eggs: 5-8, sometimes 4-9. White, with fine reddish brown dots often concentrated at larger end. Incubation is by female, 11-16 days. Male feeds female during incubation.
Young: Female stays with young and broods them much of time at first, while male brings food. Later, both feed nestlings. Young leave nest at about 18 days. 1 brood per year.

Mostly insects and seeds.
Feeds on insects, including many caterpillars in summer, plus moths, beetles, and others, also spiders. Eats many insect eggs and pupae, especially in winter. Also eats seeds of various trees.
Behavior:
Forages mostly by moving about in dense conifers, gleaning insects from surface of twigs, needles, or trunk. May probe in bark crevices, and may take food while hovering briefly. Also will extract seeds from cones, and will take seeds from
deciduous trees such as birches. May store food and retrieve it later.