Source to all birds on the Planet
admin
Eurasia, Oriolidae, Passeriformes
Comments 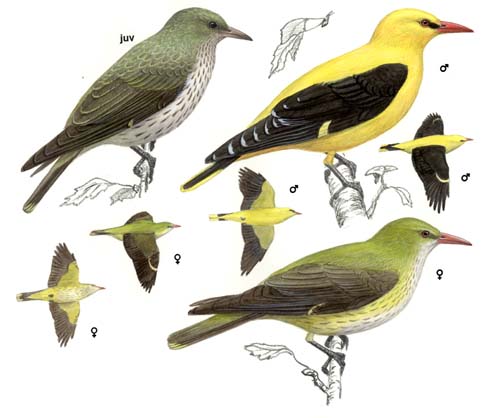 Rather large, colorful passerine, with strong bill, long wings, and quite long tail. Male bright yellow with black wings and black on tail. Female immature sap-green above, cream with dull dusky streaks below, with blackish wings. A shy tree-dweller, but song loud and distinctive. Sexes dissimilar, no seasonal variation.

Listen to the sound of Golden-Oriole

In west Palearctic, breeds in middle latitudes, penetrating rather higher in continental interior and rather lower near warm ocean coasts. An arboreal but not a forest bird, and predominantly a lowland dweller, even in Switzerland not normally breeding above 600 m. Avoids large dense forests, especially of conifers, and also terrain which is treeless, or lacking in groups, lines, strips, or park-line open stands of mature deciduous trees with ample crowns well above ground.
Nature and structure of undergrowth, sward, or herbage immaterial, as lower vegetation and ground surface are little visited.

Eggs laid from early May to late June or early July, earlier in south than in north. One brood and replacement clutches only after early loss. The nest is built in a fork of thin branch high in tree towards outer edge of crown, more rarely between parallel branches. Occasionally hard against trunk. Nest is a slung hammock-like below fork; foundation of plant fibres, grass, dry leaves, cloth, paper, string, wool, moss, bark, etc. it is held together by grass or bark fibres 20-40 cm long looped, or stuck with saliva, and pulled more or less tight between support branches. The nest is lined with fine grass, wool, feathers, down, cocoons, small pieces of paper, etc. Clutch: 3-4 (2-6) eggs,Incubation 16-17 days, by both sexes, Male for very short periods while female feeds.
Young fledge after 16-17(-20) days.

Insects and berries. Feeds mainly in tops of trees, picking items from foliage. Also catches insects in flight and sometimes feeds on ground among herbs.
Note, however, that bathing behaviour involves flights over water, and will drink in flight like Swallow, otherwise drinks by sucking 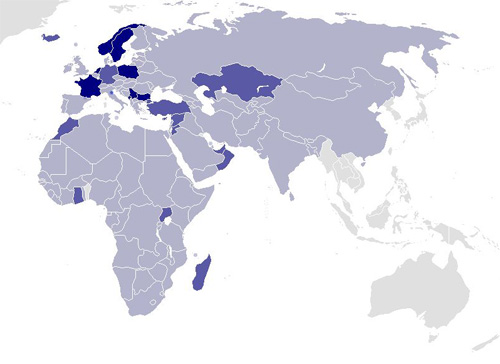