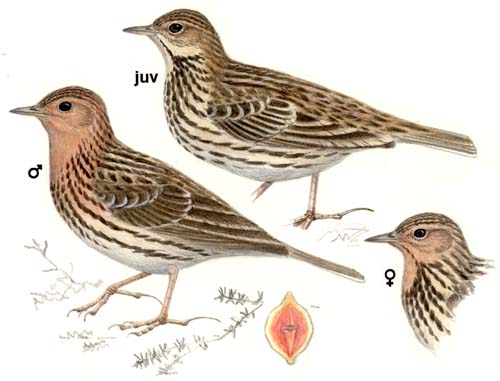 Listen to the sound of Red-throated Pipit

Arctic and subarctic, between isotherms of 2-15 C degrees, north of forest limits and mainly on shrubby or mossy tundra, although locally in Scandinavia up to 1000 m, and near water in swamps of willow and birch.
Near settlements will adapt to drained and cultivated land, as well as damp grassy flats.

May at southern extent of range, June-July further north. Nest site is built on ground in side of hummock or bank, or sheltered by low scrub. Sometimes at end of short tunnel in mossy hummock. Nest is hollow in moss or ground, filled with cup of grass leaves and stems, with some moss and dead leaves in base, minimal lining of finer grass, hair, and some feathers. Clutch size 5-7 eggs, which are incubated 11-14 days by female only.

Chiefly insects, also small water snails and a few seeds. Feeds on ground by pecking and probing amongst vegetation. On seashore, probes amongst washed up seaweed
After capture, largest prey items are vigorously pounded on ground before swallowing. In summer feeds most actively from late morning to late afternoon.

Anthus cervinus is a widespread summer visitor to northern Fennoscandia and Russia,
with Europe accounting for less than a quarter of its global breeding range. Its
European breeding population is very large (>1,000,000 pairs), and was stable between
1970-1990. The relatively small populations in Sweden and Finland declined during
1990-2000, whereas the trend for the Russian stronghold was unknown, but there
was no evidence to suggest that its status deteriorated significantly.