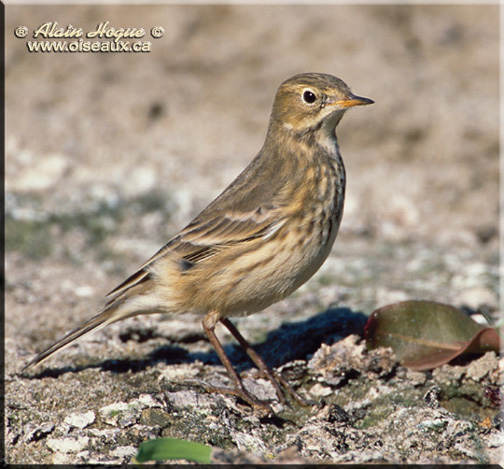 American Pipits are small, brownish, streaked birds that are sparrow-like in appearance, but with much thinner bills. Males and females look alike. They are slender, with gray-brown backs and buff-colored breasts. During the breeding season, their breasts may be streaked or unstreaked, but outside the breeding season, they are typically more heavily streaked.

Listen to the sound of American Pipit

American Pipits are open-country birds in all seasons. They breed in alpine areas, near seeps, streams, lakes, or wet meadows. During migration and winter, they come down into the lowlands and can be found on beaches, marshes, agricultural fields, short-grass prairies, and mudflats.

American Pipits are monogamous, and pairs may form during migration or on the wintering grounds. They nest on the ground, usually in a sheltered spot, tucked under overhanging grass, a rock ledge, or other object. The female builds a cup-nest out of grass, sedge, and weeds, and lines it with finer grass, feathers, or hair. She incubates 3-7 eggs for about 14 days while the male brings her food. The female broods the young for the first 4-5 days, and the male continues to bring food for the female and the chicks. After brooding, the female joins in feeding the chicks. The young leave the nest after about two weeks, but stay close and are fed by both adults for another two weeks, after which they join loose flocks of other immature birds.

American Pipits are highly migratory and travel during the day in loose, straggling flocks. Fall migration begins in mid-September through October, when weather begins to deteriorate on the Arctic breeding grounds. American Pipits winter throughout the southern United States south to the tip of Central America. Birds return to the Arctic in the spring, with the peak migration occurring from late March through early May.