Source to all birds on the Planet
admin
Mimidae, North America, Passeriformes
Comments 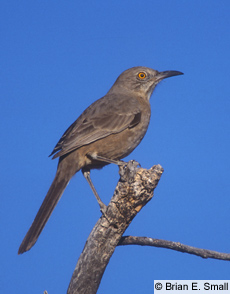 Of the various drab desert thrashers, this one may be known by its shorter, more robinlike bill (lower mandible quite straight). Breast lightly spotted. Eyes usually yellow
.

Listen to the sound of Bendires Thrasher

Desert, farmland; cholla, thorny bushes. Lives in various kinds of dry, semi-open habitats. Perhaps most common i
n Sonoran desert with variety of shrubs and cholla cactus and with some understory of grass. Also found where dense hedges or shrubs are next to farmland and in grassland with scattered shrubs and yuccas.

Male sings in spring and summer to defend nesting territory.
Nest: Usually placed in dense low shrub, tree, or cactus, commonly in cholla, yucca, mesquite, acacia, desert hackberry, also in other low growth, usually 3-
10′ above the ground. Nest is typically a bit smaller, more compact, and made of finer materials than the nests of most thrashers; usually has outer layer of twigs, inner layer of soft material such as grass, rootlets, feathers, animal hair.
Eggs: Usually 3, sometimes 4, rarely 5. Whitish to pale gray-green, blotched with brown and buff. Incubation period and role of the parents in incubation are poorly known.
Young: Both parents bring food to the nestlings. Young leave nest about 12 days after hatching. 2 broods per year, perhaps rarely 3.

Mostly insects, some seeds and berries.
Feeds mainly on insects, especially ants, termites, beetles, antlions, grasshoppers, and others; also spiders. Also feeds on seeds of grasses and other plants, various berries, and cactus fruits, including those of giant saguaro.
Behavior: Forages mos
tly on the ground. Picks up insects from the surface, or uses its bill to scratch or dig slightly in the soil or to turn over rocks or other items. Has a small bill, and does not dig as effectively as most thrashers.

This species is listed as Vulnerable because it is suspected to be undergoing a rapid decline. However, recent trends are poorly documented, and further information may warrant a revision of its status. Putative threats are poorly understood, but the species may be negatively impacted by habitat destruction and degradation resulting from agricultural expansion and development.

Southwestern United States to Sinaloa, Mexico.
b Migration: Migratory in northern part of range, and even in southern Arizona is partly migratory, being numerous mostly from February to September.