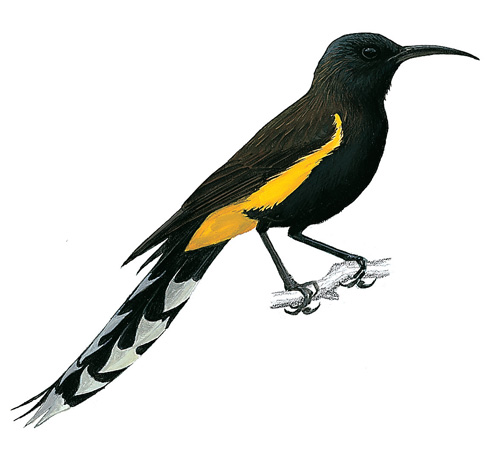 The main islands of Hawaii each had their own distinctive species of ‘O’o. All are closely related but their respective island isolations led to certain clear differences. The Oahu ‘O’o was distinguished chiefly by its strikingly marked black and white tail. Like its relative on Hawaii it sported yellow flank plumes and undertail-coverts.

This was probably the first of the ‘o’os to become extinct. A certain Herr Deppe, about whom virtually nothing is known, collected a series of specimens during 1837 from the hills behind Honolulu. Never again was the species encountered or, if it was, no-one ever mentioned it. Specimens do exist for which there is no provenance noted, so it is possible that a later collector found the species. Three that are known to have been taken by Deppe are in the museums of Berlin, Vienna and New York, but in addition to these there is a second specimen in New York, two examples in London, one in Paris, and one in Cambridge, Massachusetts. Nothing is known of the living bird.