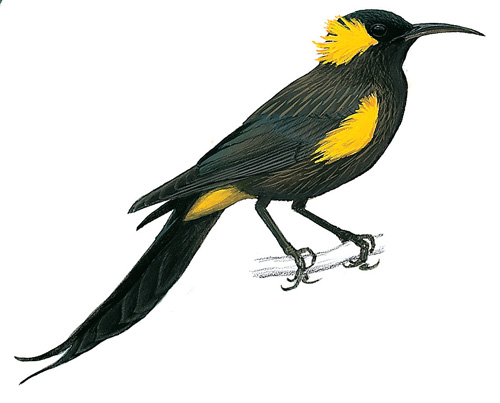 The ‘o’o that inhabited the island of Molokai was discovered rather later than the others but it was known to science as an extant species for only a very short period. Towards the end of the nineteenth century there was a sudden surge of interest in the birds of Hawaii, and several teams of collectors ranged over the islands in search of specimens. It is a curious fact that a number of Hawaiian birds are known solely from this period. Clearly the species in question were all at the point of extinction when they were discovered, and were it not for the collecting zeal that inspired these Hawaiian expeditions during the 1880’s and 1890’s, their existence and passing would probably have gone entirely unnoticed by the world of ornithology. Two beautifully illustrated books resulted from the collections made at this time, Aves Hawaiiensis (1890-1899) by S. B. Wilson and A. H. Evans and The Avifauna of Laysan and the Neighbouring Islands (1893-1900) by Walter Rothschild, and it is from the words and pictures contained in these books that almost all knowledge of certain lost species is derived.

The Molokai ‘O’o provides just such a case. Described in 1893 by Walter Rothschild from specimens procured by men in his pay, it was gone by the early years of the twentieth century, the last definite record coming from the year 1904. A few later sightings were claimed but these may or may not be reliable.

Curiously, and remarkably, the species was reported from the nearby island of Maui during 1981 but this claimed sighting is almost certainly a misidentification. Nevertheless, there is some evidence to show that the species did once inhabit Maui. A certain H. W. Henshaw, who was a very reliable observer, reported seeing an individual during June, 1901. Virtually nothing is known of the species in life. It differed from the two previous species by showing bright yellow cheek tufts and by carrying a tail with much less white on it.