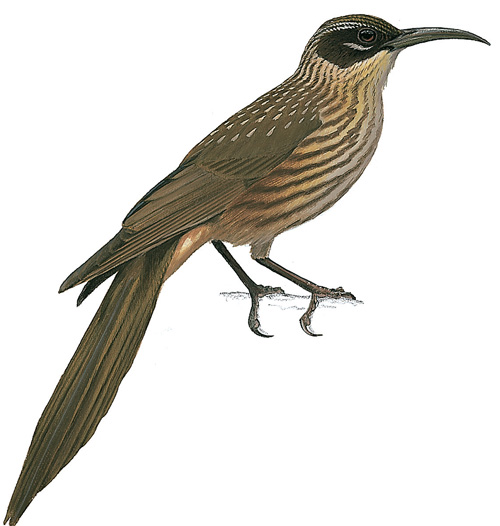 In terms of extinct birds the Hawaiian Islands are one of the world’s black spots. The losses at species and subspecies level have been enormous and there is no sign that this process is letting up. There are several species and races that are unlikely to see out the next decade, such as the Po’o’uli, mentioned above.

Many Hawaiian species are known only from skeletal material, and it is not known when such creatures died out. Perhaps it was comparatively recently, perhaps it was some way back in time. Other species are known just from small series of specimens taken by ornithological collectors during the last decade of the nineteenth century, at which time there was a great spate of scientific interest in the Hawaiian Islands. What can be said with certainty is that the coming of man entirely shattered the ecosystems of the islands. It is clear that the Polynesian arrival had a devastating effect. Although the coming of Europeans, centuries later, probably increased the pace of extinction, the real damage was already done, and the endemic avifauna consisted largely of scattered, fast-diminishing populations.

One such badly affected species was the Kioea, a large and handsome honeyeater. The species was first noticed during the visit to Hawaii of Charles Pickering and Titian Ramsay Peale as part of The United States Exploring Expedition of 1838-1842. At the time Peale wrote of it: It is very active and graceful in its motions, frequents the woody districts, and is disposed to be musical, having most of the habits of a Meliphaga [honeyeater]; they are generally found about those trees that are in flower. Clearly Pickering and Peale experienced no great difficulty in finding individuals, but the birds were rapidly becoming rarer. In the period leading up to 1859, during which year the last known specimen was taken, a local shopkeeper with an interest in natural history, J. Mills, killed two or three individuals on wooded slopes below the crater of the volcano Kilauea. After Mills’s last record, Kioeas were never seen again.

Clearly, and notwithstanding the fact that Pickering and Peale located birds reasonably easily, the species was approaching extinction even as it was being discovered. Four specimens survive today and there may never have been more. Of these, one is in Honolulu, one in New York, one in Washington and one in Cambridge, England. Apart from the brief account given by Peale, there is almost nothing on record concerning the species’ habits. Although Peale described the birds as inclined to be musical, the call was described as a loud “chuck”, but this is the sum of additional knowledge. The species is said to have been an inhabitant of the high plateau between the mountains and the edge of the forest but whether or not this kind of area was representative of the original range cannot be said. Although the Kioea was only ever located on the island of Hawaii, fossil evidence shows that the species was also once present on Oahu and Maui, and it was also claimed to have occurred on Molokai.