Source to all birds on the Planet
admin
Hirundinidae, Passeriformes, South America
Comments 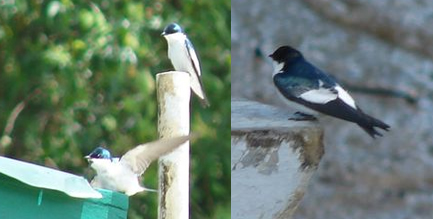 The adult White-winged Swallow is 13.2 cm long and weighs 17 g. It has iridescent blue-green upperparts, white underparts and rump, and white edgings to the secondary flight feathers. The sexes are similar, but juvenile plumage is grey brown above apart from the white rump.

Listen to the sound of White-winged Swallow

This swallow builds a cup nest lined with other birds’ feathers and some seed down in a tree hole, between boulders or in man-made structures. The clutch is 3-6 white eggs.

It perches on branches above water and catches insects flying fairly low and close to the surface of the water. It normally occurs in pairs or small flocks.