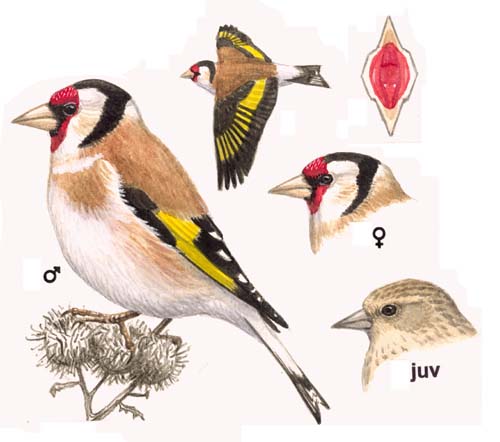 Listen to the sound of Goldfinch

Breeds over west Palearctic north to isotherms of 17 C in boreal, temperate, Mediterranean, and steppe zones, both Atlantic and continental.
Predominantly in lowlands, but in Switzerland breeds generally up to 1000 m, and occurs in late summer and autumn up to 2400 m, resorting to alpine meadows and areas near chalets. In breeding season, shows preference for orchards, parks, gardens, avenues, and tree nurseries, often in or near human settlements, and especially where patches of tall weeds and other concentrated food sources are present. Also favours streamside of fen woodlands, open or fringe woodlands and heath lands, and commons with well-grown hawthorn, gorse, and other scrub or thicket species.

Breeding starts late May to mid July in Britain, first half of May to early July in Finland, end of may to mid June in Germany, April-May in North Africa, May-June in Azores.
Nest site is Well hidden in inaccessible outermost twigs of tree, and cover seems more important than support.
Nest is a very neat and compact cup of moss, roots, grass, and spider silk, which sometimes binds foundation to twigs, thickly lined with plant down, wool, hair, and occasionally feathers.
4-6 eggs are laid, incubation, 9-14 days by female only.

Small seeds, mainly Compositae. In breeding season, also small numbers of invertebrates. Prefers seeds in milky, half-ripe state, so changes food plants constantly over year, and continually on move from one patch of suitable species to another, which can be several km away, sometimes following the same route every day.
Generally takes seeds directly from flower or seed-head on plant, mostly on herbs, rarely grasses, in wasteland, open countryside, copses, etc., less often in parks or gardens. In winter regularly in trees, principally alder and pine.

Mainly resident and dispersive. In the winter they group together to form flocks of up to about 40 birds, occasionally more. Northern birds can move further South to escape extreme cold 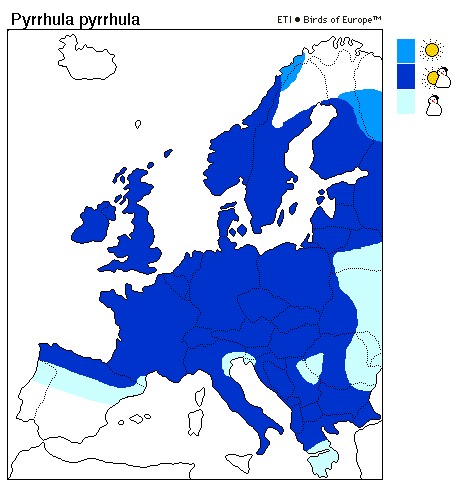